LETHBRIDGE -- The woman charged with a fatal pedestrian crash in June 2020 is a decorated war veteran who was injured while serving in Afghanistan.

According to the Lethbridge Police Service, 37-year old Melissa Whitegrass was arrested March 2 at a north-end home.

She is facing charges of first-degree murder, dangerous driving causing death and assault with a weapon in connection with the death of 30-year-old Austin James (AJ) Forsyth of Lethbridge. Police said Forsyth and the accused were involved in a common-law relationship until 2017.

Forsyth was struck by a vehicle in an alley in the 900 block of 13 Street South last June. The vehicle involved, a 2005 yellow Dodge Ram, fled the scene before police arrived.

Over the past several months, the LPS violent crimes unit continued with its investigation and allege the incident was a case of domestic violence.

Insp. Jason Walper, of the LPS criminal investigation division, said Whitegrass was found at the scene of the collision and indicated to responding officers that it was accidental in nature.

"But certainly our investigation and further follow up has led us to believe this was not accidental, and was an intentional act," said Walper.

Whitegrass had served in the military, and was recognized for her bravery and sacrifice.

She was wounded in a deadly attack while serving in Afghanistan in 2010, suffering a concussion, broken ribs, a back injury and hearing loss after an attack on a NATO convoy.

Master Corp. Whitegrass talked about the incident in July of 2011, during a ceremony in Standoff, Alta. where she was presented with the Canadian Armed Force’s Sacrifice Medal.

"A vehicle borne IED (improvised explosive device) hit us, filled with 1,650 pounds of explosives," she said.

Whitegrass maneuvered her vehicle to avoid the flying engine block from the bomber's vehicle. Despite her injuries, she maintained composure and remained in place, providing security and assistance with the evacuation of casualties.

Whitegrass was presented with the Chief of Defence Staff Commendation for her actions during that incident.

She was also selected to capture Prime Minister Stephen Harper during a Kainai Chieftainship Ceremony in 2011, an honour traditionally given to warriors. Whitegrass was the first woman to be given that role. 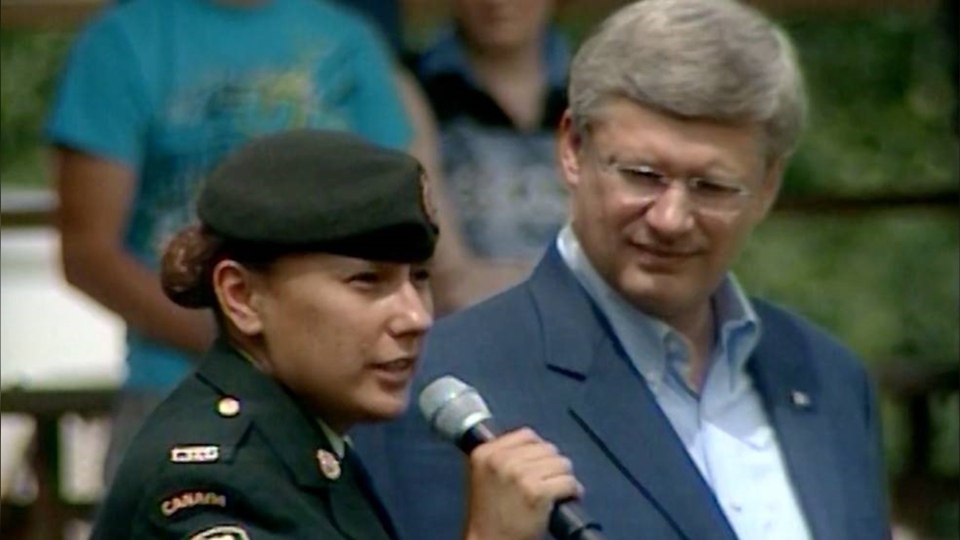 The Department of National Defence said Whitegrass released from the Canadian Armed Forces at the rank of Master-Corporal on Sept. 3, 2013.

On social media, friends said Forsyth was always looking for a good time and always had a smile on his face. They describe "AJ" as a true friend, who had hopes and dreams for his future.

Police said the motive behind his death is not clear at this time. Whitegrass — who, according to family members, is a mother of three — has been remanded in custody with a court appearance scheduled for March 9.