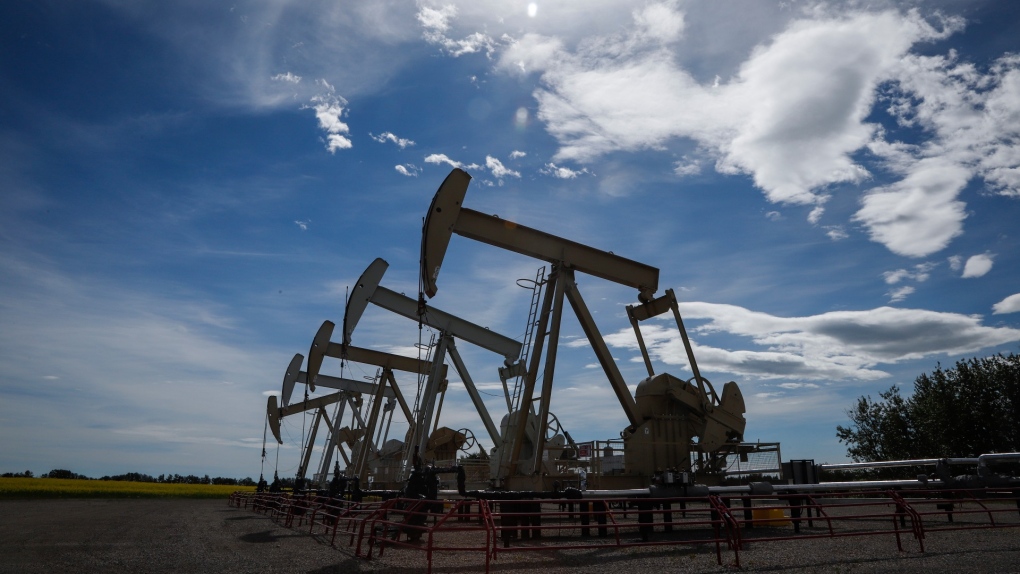 Pumpjacks draw oil out of the ground near Olds, Alta., Thursday, July 16, 2020. THE CANADIAN PRESS/Jeff McIntosh

CALGARY -- A judge is to hear arguments this week over whether Alberta's public inquiry into the purported foreign funding of environmental charities is a valid defence of the province's ailing oil industry or an attempt to silence dissent.

Court of Queen's Bench Justice Karen Horner is to hear a challenge from environmental law charity Ecojustice on Thursday and Friday. The hearing's initial April date was delayed because of the COVID-19 pandemic.

"I can't recall an issue that has prompted so much public interest in recent times for an Ecojustice case, and overwhelming support," said executive director Devon Page.

The inquiry was one plank in a "fight-back" strategy touted by the United Conservatives on the 2019 election campaign trail.

Forensic accountant Steve Allan was tapped that summer to be commissioner with an initial $2.5-million budget and July 2020 deadline. Allan's report is expected on May 31 after three extensions and a $1-million budget increase.

Page called the inquiry a "political stunt that's not based in reality" and wants it shut down.

Ecojustice argues in its brief that the inquiry was called for an “improper purpose,” which it says was "targeting, intimidating and harming organizations that have raised concerns about the environmental impacts, including climate change impacts, of oil and gas development in Alberta."

Page said shortly after the inquiry was announced, he took a call from a Nova Scotia resident who worried about being called before it because of a letter to the Alberta government opposing the Trans Mountain pipeline expansion.

"Will there be a report that says Canadian charities have acted in un-Canadian or anti-Albertan fashion?" Page asked.

"That prospect is real. It may not be legitimate, but it's real."

The Alberta government counters in its submissions that cabinet is “entitled - and mandated” to decide what's in the public interest and what matters are deserving of a public inquiry.

The Allan inquiry, it says, "concerns the economic viability of the entire province and the efficient and responsible development of Alberta's natural resources."

A consortium of pro-industry interveners back that view in a joint brief. The Indian Resource Council, the Explorers and Producers Association of Canada and oilpatch entrepreneur Brett Wilson together argue that "public interest requires a generous interpretation" of what the inquiry's purpose should be.

Ecojustice argues the inquiry has a "reasonable apprehension of bias." It cites numerous comments Premier Jason Kenney has made asserting the province must fight back against foreign funders of anti-oil campaigns.

"The inquiry is being used as a political pawn to support predetermined government actions," the law charity says in its submissions.

The government says it's important to draw a distinction between a politician's partisan comments and the commissioner's presumed impartiality.

Ecojustice points out that Allan donated to the campaign of Doug Schweitzer, who would go on to become a UCP cabinet minister, as evidence of bias.

A brief submitted on Allan's behalf notes he has donated to parties across the political spectrum.

"His experience and dedication on both a professional level and as a `good citizen' in his community, with matters of public interest across the political perspective, qualify him to act objectively, fairly and with integrity in the inquiry," his lawyer wrote.

Ecojustice contends the inquiry is outside Alberta's jurisdiction because it deals with matters of interprovincial commerce and trade, as well as the regulation of charities, while the province argues defence of its natural resources industry is well within its purview.

Late last year, Ecojustice lost a court bid to have Allan's work paused until there was a ruling in its lawsuit. Page said the group would make the same request at the upcoming hearing.

"The actions of an organization who seeks to undermine and discredit one of Canada's largest economic subsectors speaks for itself," said Alberta Energy spokesman Kavi Bal.

"Alberta's government was pleased to see the courts strike down a nuisance injunction application by Ecojustice, earlier this year, designed to slow down the public inquiry into foreign-funded campaigns.

"We will see this inquiry through to its completion."

This report by The Canadian Press was first published Feb. 10, 2021.