Sofia Hirani was just four-years-old when she was diagnosed with a highly aggressive form of brain cancer. Now, after several years of treatments, she is using her voice as a beacon of hope for other sick children.

"I was sad when I had to stay in the hospital," said Sofia, now a teenager.

Sofia represents one of thousands of children across Alberta who need treatment, critical care and other essential programs following a cancer diagnosis.

It’s why her parents, Shelly and Naushad, both Calgary doctors, are encouraging people to donate to the Kids Cancer Care Foundation of Alberta on Nov. 29 for Giving Tuesday.

All donations to a maximum of $100,000 received on or before Nov. 29 will be tripled by donors and philanthropists.

"This program (has been) life changing for my daughter because it’s inclusive, not just for someone like her who has cancer, but also her siblings," said Shelly.

Sofia's cancer journey started at soccer practice in 2013, when she stumbled and fell, then started to vomiting. Later, an MRI revealed she had a massive brain tumour identified by doctors as group three metastatic medulloblastoma.

After months of high-dose chemotherapy and radiation treatments, the cancer was finally eliminated, but Sofia hasn't been be the same. The radiation caused serious brain damage affecting her speech, balance, coordination, mobility and learning abilities.

"We realized once we were done with treatment, it didn't really stop," said Shelly.

"There is still the worry every time she has a headache, every time she vomits, you're worried that the cancer has come back. Every time there's a new shadow on her MRI that we go through screenings."

Sofia has since relearned to feed herself, to complete basic tasks like cooking and cognitive learning exercises. Despite this, she's still full of smiles, and enjoys spending time with her sister Sonya and big brother Shaan.

Naushad says it has been difficult at times to watch his daughter go through this painful journey, but he couldn’t be more proud to be Sofia’s father.

"She has always been someone who just has a very gentle and very caring nature, and anyone will know that their heart melts when they first meet her," he said.

"It's amazing watching her deal with all her struggles every single day and how hard she tries to overcome all the challenges that she's been through." 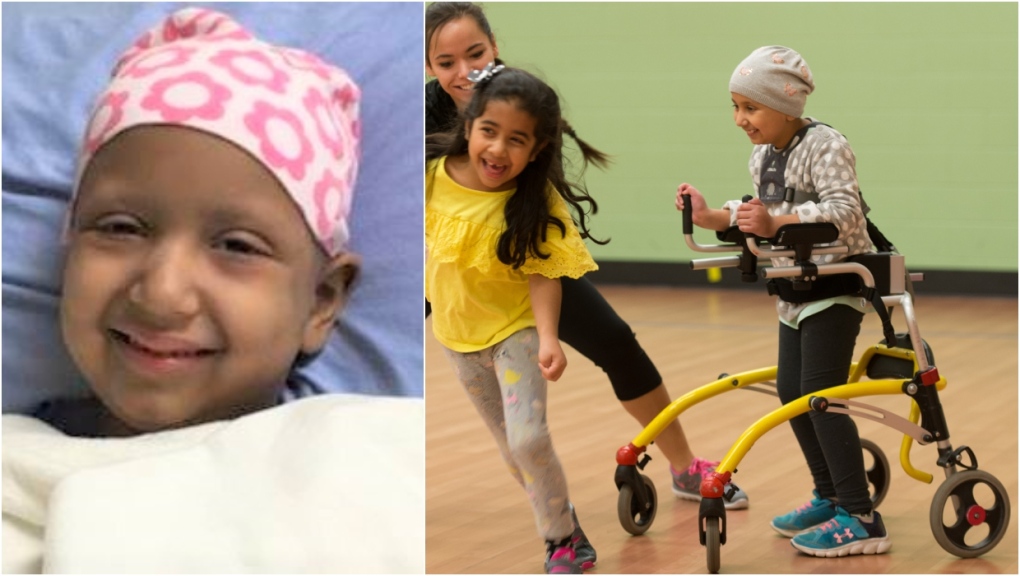 Sofia Hirani during cancer treatments (left) and after (right). One of the more recent challenges came after Sofia fell and fractured her hip six weeks ago.

Carolina Chamorro Vina, a specialist for Pediatric Cancer Patients and Survivors Engaged in Exercise for Recovery (PEER), has been working with Sofia to help her slowly regain her strength.

"The most important part of the program is being able to create normalcy for every child affected by cancer," she said.

"Funding for these programs helps kids try new things, restore their strength and cardiovascular capacity, decrease their fatigue, and then as they feel comfortable enough, go back into the community and enjoy any other activities."

The PEER program also helps kids with cancer to continue developing their math and reading skills through specialized tutors.

To donate to the Kids Cancer Care Foundation of Alberta's Giving Tuesday fundraiser, you can visit the organization's website.