Which quarterback will grab the spotlight is a prominent subplot of Saturday's divisional clash between the B.C. Lions and host Calgary Stampeders.

The season's first meeting of B.C. (6-1) and Calgary (5-2) tussling for second place in the West Division is a fascinating pairing of a decorated Stampeders quarterback closing in on a milestone and a young Canadian Lions quarterback taking the league by storm this season.

The division-leading Winnipeg Blue Bombers (9-1) dropped their first game of the season Thursday in a loss to Montreal, but it's still a race for runner-up behind them at this point in the season between the Lions, Stampeders and more distant Saskatchewan Roughriders (4-4).

So there's meat on the bone in the first of three clashes this season between Calgary and B.C. — they finish with a home-and-home in September — with the temperature at kickoff Saturday projected to be 31 degrees C.

"We know where everyone is in the standings," said Stampeders head coach Dave Dickenson, who returns to his team's sideline after sitting out last week's win in Ottawa in COVID-19 protocol.

"You've got to beat the teams ahead of you. The other thing is you've got to win at home."

Said Lions head coach Rick Campbell: "It's a big game. We also have 11 more games to go and we play these guys three times. I want to make sure we're sustainable in our approach.

"Yes, we absolutely want to win this game. If we win, it doesn't mean we're the champions and if we lose, it's doesn't mean our season (is) wrecked. That's just the coach in me making sure we keep our perspective and stay on task."

"If it's a milestone that we reach and we don't win the game, I'm not going to be happy," Mitchell said.

This guy is only 143 yards from becoming the all-time leader in passing yards in Calgary Stampeders history!

The Stampeders relied on defence and Rene Paredes field goals for the victory as Mitchell and his receivers were not in sync.

They haven't connected for a touchdown pass in two straight games for the first time in Mitchell's 10-year career.

"We haven't been making the difficult catches, sometimes the routine catches," Dickenson said. "The coverage tells you where to go with the ball. You can't have favourites out there. Have faith that we're going to make plays.' 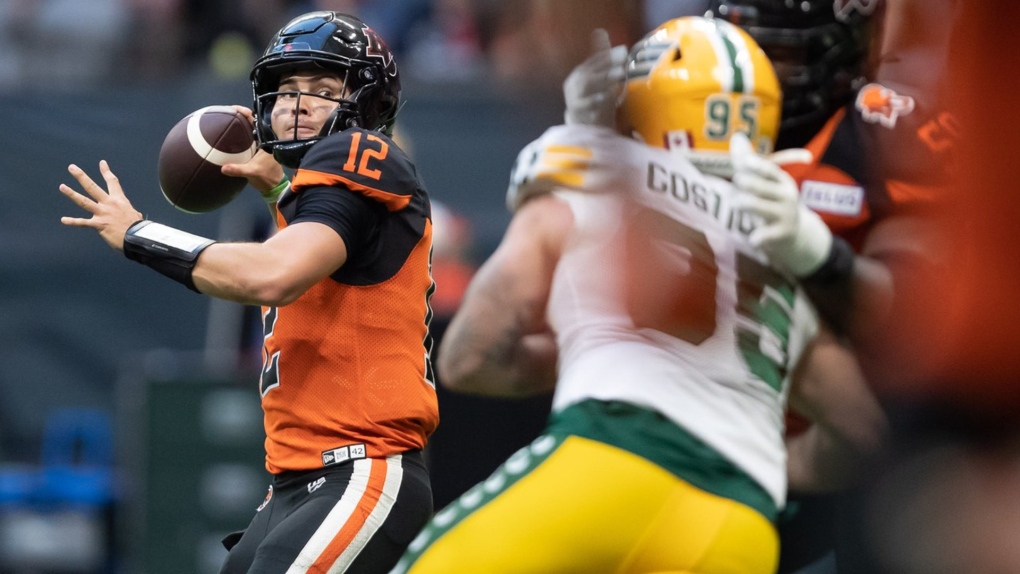 B.C. Lions quarterback Nathan Rourke passes during the first half of CFL football game against the Edmonton Elks in Vancouver, on Saturday, August 6, 2022. THE CANADIAN PRESS/Darryl Dyck

Lions counterpart Nathan Rourke, by contrast, is coming off a monster game of 477 yards, five touchdown passes, a rushing TD and a 91.9 per cent completion rate in a 46-14 thrashing of Edmonton.

The 24-year-old from Victoria tops the CFL in touchdown throws with 21, and is on pace to break Doug Flutie's single season record (48).

"Calgary's a good team and it's always tough to win on the road in what I'm sure is a tough environment as well," Rourke said. "When you play against teams like this, sometimes it's a good measuring stick to where you are as a team.

"No doubt, Calgary will be one of the better teams in the West this year, so it'll be good for us and hopefully we can come out with a win."

Mitchell says people shouldn't doubt Rourke's ability to have long-term success just because Rourke is a Canadian quarterback and Americans have long dominated that position in the CFL.

"When people have amazing things happening, stop trying to find a reason to hate on it," the Texan said. "That kid's gone out and balled out in every single game he's been in."

Rourke smiled at that praise.

"He's a nice guy," the Lions quarterback said. "I remember I talked to him a couple of times last year, and tremendous respect for someone who's able to have as much success for a number of seasons.

"Would love to achieve some of the things that he's achieved in his career. Don't think he's tailing off any time soon, unfortunately, for us."

Both teams are without their top rushers Saturday. Calgary's Ka'Deem Carey (hamstring) will sit out a second straight game, while B.C.'s James Butler (ankle, rib) is also out. Carey's sub Dedrick Mill ran for 100 yards against Ottawa.

WALL WATCH: Stampeder rookie defensive back Titus Wall was a difference-maker in the win over Ottawa with two interceptions. He ran one back for Calgary's lone touchdown of the game.

SACK STINGY: B.C. and Calgary rank first and second in fewest sacks allowed at seven and eight, respectively. The Lions' average of one per game is the lowest in club history while the Stampeders' 1.14 per game pace is the team's best since 2016.

DOUBLE TROUBLE: Lions defensive ends Mathieu Betts and Sione Teuhema will have something to say about Calgary's ability to protect Mitchell. They're tied for third in the CFL with five sacks apiece.

This report by The Canadian Press was first published Aug. 12, 2022.