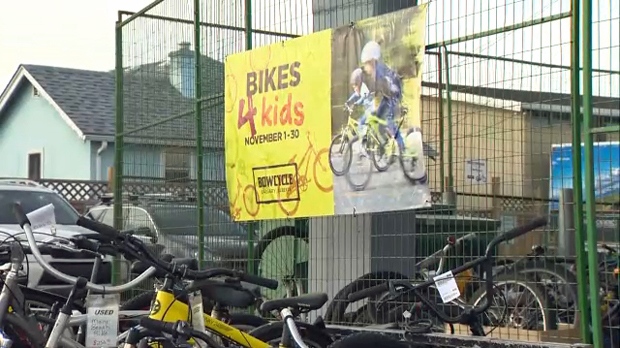 Organizers with an annual initiative that repairs unwanted bicycles and gives them to charities are disappointed but undeterred after someone stole a handful of the bikes overnight.

“Unfortunately, last night somebody decided that they needed some bikes that we had set aside for Bikes 4 Kids and popped the fence off and took a few,” explained Bob Grunewald, marketing director of Bow Cycle.  “I realize that somebody must think they need them but I don’t think they obviously needed eight.”

Grunewald says Bikes 4 Kids has existed for 27 years and they still require roughly 70 more bikes this year to fulfill the hundreds of bicycles they’re partnering charities, including Hull Services and the Magic of Christmas, have requested this year.

“It’s just a good excuse for people to clean out their garage, their storage lockers, of old bikes. We also help keep bikes out of the landfill. We’ll get a metal bin in later on so if a bike’s not refurbishable, we’re going to properly recycle it and save it from just going to the junkyard.”

Grunewald says the overnight theft was the first time someone had stolen bikes from the program.

“It’s a hard time for a lot of people,” said Grunewald before addressing the thief or thieves. “We’re trying to do this for kids and we hope you’ll remember that.”

Unwanted bicycles can be brought to Bow Cycle, 6501 Bowness Road Northwest, in November and anyone who donates a bike will have their name entered in a draw for a $250 Bow Cycle gift certificate.