Dozens line up a day ahead of Jollibee opening in Calgary 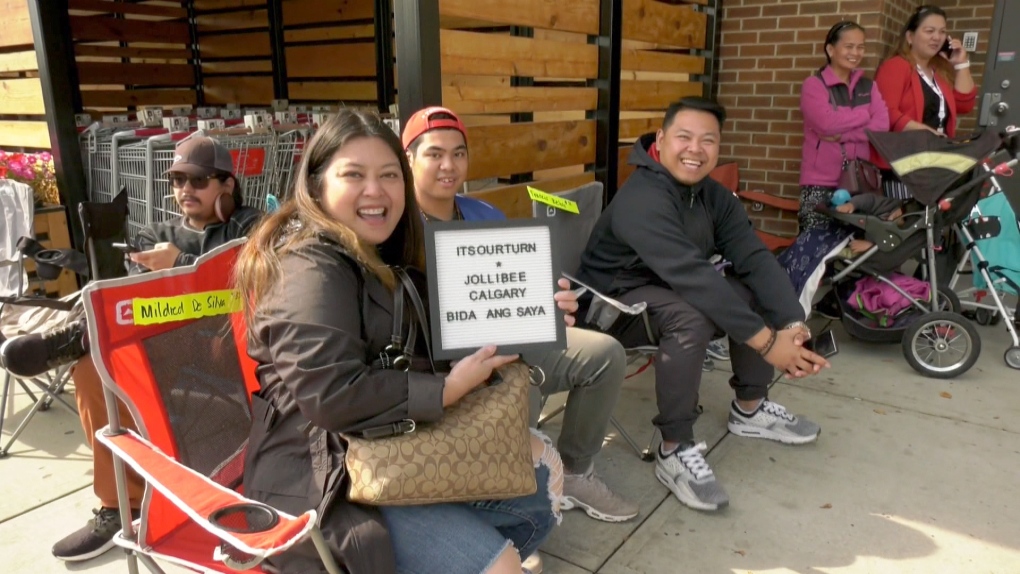 Calgarians were already lined up at Jollibee in northeast Calgary on Thursday, a full day before the Filipino fast-food restaurant opens.

Dozens of Calgarians are spending Thursday lined up outside Jollibee at Pacific Place Mall, a full day before the city’s first Filipino fast-food location is set to open its doors.

About 35 people were in line by about 1 p.m., including Francis Beloso, a 31-year-old who was born in the Philippines.

“If you’ve ever had any Filipino food, there’s that flavour, there’s always a distinct taste where you think, man, that’s different from KFC.”

Tim Dixon, who’s first in line, arrived at 7 p.m. Wednesday after being convinced by his girlfriend.

“She’s a real big supporter of Jollibee and talked me into it and it seems like a real fun idea so yeah, I thought, let’s do it,” he said.

Barong-clad Funko Pop! figures will be handed out to those in line carrying the most unique banners and posters with the hashtag #ItsOurTurn, and the first 50 people in line who make a $25 purchase will receive a year’s supply of Jolly Crispy Chicken, which equates to one, six-piece bucket each month.

An advance tasting is also being held for 50 people on Thursday.

"As a major cosmopolitan area and Alberta's largest city, Calgary is a key stepping stone in our expansion across Canada," said Beth Dela Cruz, president of JFC Brands North America.

"To our Calgary family who have been eagerly awaiting the opening of this store, we look forward to welcoming you this Friday. It's your turn."

A recent Jollibee opening in Edmonton drew 8,000 people on the first day, including one person who waited for three days, without having tried the food before.

Considered a fast-food staple in the Philippines, where there are more than 1,300 locations, the first Canadian location opened in Winnipeg in 2016.

There are now 4,500 Jollibee locations in 21 countries.

Calgary’s Jollibee will be at 999 36th Street N.E., at Pacific Place Mall.