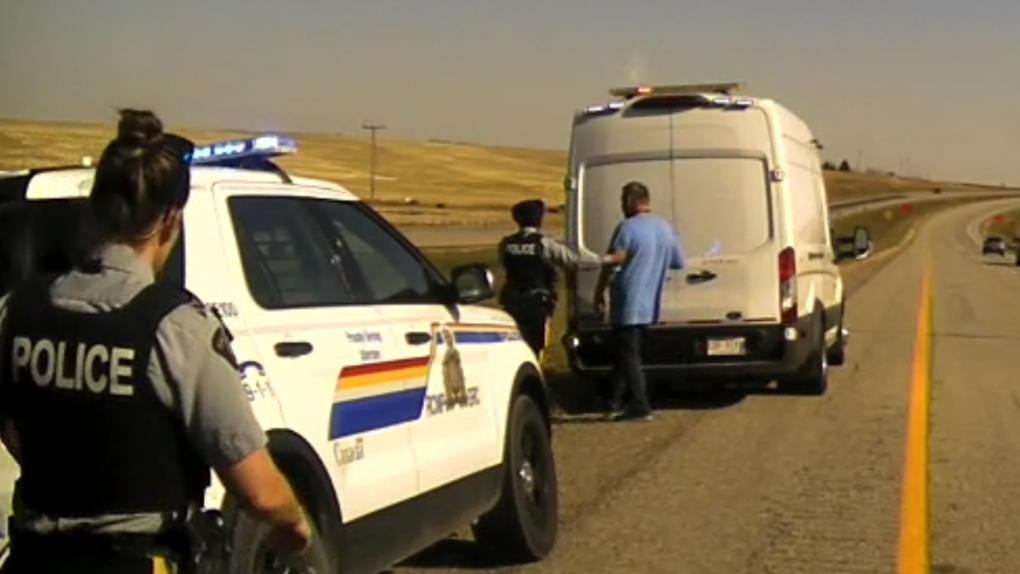 RCMP members speak with a driver during an investigation on the Trans-Canada Highway west of Strathmore n Oct. 1. RCMP officials say the van was stolen, the driver had a suspended licence and he had been drinking. (supplied)

A Manitoba man faces vehicle theft charges following an RCMP investigation into reports a van was swerving and frequently drifted on to the shoulder of the Trans-Canada Highway east of Calgary.

Officers responded to an area west of the town of Strathmore on the afternoon of Oct. 1 but their pursuit was short-lived as the suspect vehicle, a white utility van, had already stopped along the highway.

RCMP officials say the driver was outside the van "in a confused state" and there were signs he had been drinking.

A roadside breath sample warranted a 72-hour suspension of the driver's licence, RCMP said, but further investigation determined the 42-year-old Manitoba man was driving with a suspended licence and the van had been stolen in Calgary roughly six hours earlier.

"This report is a positive example of what can be found with timely reporting of suspicious activity or suspected impaired driving," said Staff Sgt. Mark Wielgosz, Strathmore RCMP detachment commander, in a statement. "Our members were able to respond in a timely manner to prevent further risk to the public and recover a stolen vehicle."

Larocque remains in custody ahead of his next court appearance.

RCMP confirm the utility van was returned to its rightful owner.

A top European Union official warned Elon Musk on Wednesday that Twitter needs to beef up measures to protect users from hate speech, misinformation and other harmful content to avoid violating new rules that threaten tech giants with big fines or even a ban in the 27-nation bloc.

Grandparent scams are on the rise. Here's how you can protect yourself

Police across the country are seeing a rise in criminals preying on fears of the elderly with what's known as grandparent scams.

Oklahoma musician Jake Flint died unexpectedly over the weekend, hours after getting married, his publicist says. He was 37.

Amazon CEO Andy Jassy said Wednesday the company does not have plans to stop selling the antisemitic film that gained notoriety recently after Brooklyn Nets guard Kyrie Irving tweeted out an Amazon link to it.

Eligible Canadians can now apply for the new federal dental benefit, Canada plays its final men's World Cup match, and Christine McVie of Fleetwood Mac dies at 79. Here's what you need to know to start your day.