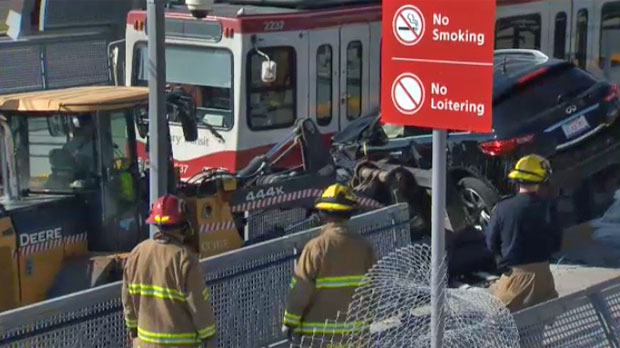 A young woman’s time behind the wheel of an SUV ended abruptly when the vehicle she was driving left a parking lot, crashed through a barrier and landed metres below on the platform of a southwest CTrain station.

According to police, family members were teaching the young woman to drive in the parking lot of the Calgary Islamic Center’s southwest masjid in the 5600 block of 14 Ave SW at around 8:00 a.m. when she lost control of the Infiniti SUV.

The SUV crashed through safety barriers on the south edge of the parking lot and plummeted nearly three metres to the platform of the Sirocco LRT station below.

The three occupants of the SUV were not seriously injured in the crash and, according to EMS officials, refused medical assessment. No one on the platform was struck by the vehicle.

CTrain service was temporarily disrupted on the west end of the CTrain’s blue line and shuttle service transported passengers between the 69 Street, Sirocco and 45 Street stations. Sirocco station reopened shortly after noon.

#CTRiders #BLueLine Sirocco station is now open. We are single tracking all the CTrains on the Outbound track between 69 st and 45 St.