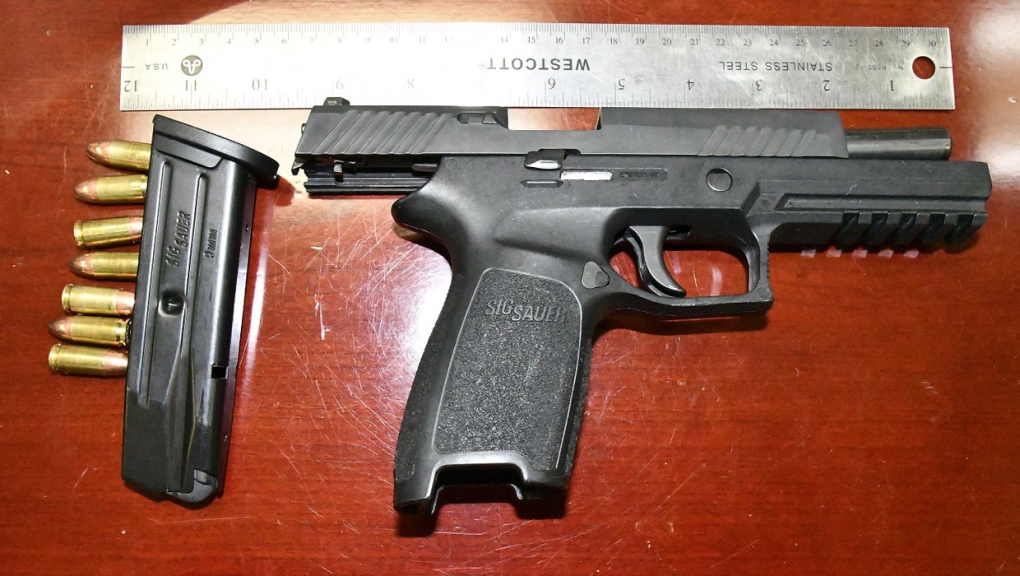 One of the suspects was found in possession of a loaded pistol when he was arrested by RCMP in Drumheller. (Supplied)

CALGARY – Charges have been laid against two people from southern Alberta after they were arrested in possession of a number of guns, a large amount of cash and a stolen vehicle.

Drumheller RCMP were called to investigate a suspicious vehicle on Oct. 11 and soon found it parked in the centre of the community.

Further investigation determined the plate did not match the vehicle, which was also reported stolen.

A woman, the passenger of the vehicle, was arrested while she was exiting a nearby business while the driver, a male, was still inside.

When officers went inside to look for the suspect, the man attempted to flee on foot but was arrested.

He was found to be in possession of a large amount of cash and a loaded handgun, also believed to be stolen.

A subsequent search on the vehicle, a dark green 2004 Audi station wagon, discovered:

A number of the bills seized by police were uncirculated currency that police say may have come from a private collection.

RCMP say it's too early to determine if the suspects are in any way connected to a recent break and enter that took place in Craigmyle, Alta. but one of the firearms has been reported stolen from Saskatchewan.

Tyson McDonald-Sherba, 24, of Trochu is charged with:

He is additionally facing one charge under the provincial Traffic Safety Act for operating a vehicle while unauthorized.

April Margaret Couturier, 32, of Drumheller is charged with:

McDonald-Sherba was remanded into custody and will appear in Strathmore court on October 15 while Couturier was released on her own recognizance and is expected to appear in Drumheller court on Oct. 25.

Meanwhile, RCMP and the Calgary Police Service are continuing to investigate the case and ask anyone who may have seen the suspects' vehicle over the past week in the City of Calgary or surrounding areas to contact either Cpl. Pergunas of the Drumheller RCMP or Det. Straub of the CPS with any information.