If the federal government passes two contentious energy bills in their current form, that will inflame “a growing national unity problem in Alberta,” Premier Jason Kenney warned after testifying before a Senate committee in Ottawa on Thursday.

Kenney is in the nation’s capital, along with provincial Energy Minister Sonya Savage, days after being sworn into office to speak against Bill C-69, which will change how major infrastructure projects are assessed and approved. He also took aim at Bill C-48, which would limit oil tanker traffic in the waters between the tip of Vancouver Island and Alaska.

“I will be very clear with the prime minister that if (Bill C-69) and Bill C-48 are adopted in anything like their current form, that this will be inflaming a growing national unity problem in Alberta, and will be a body blow to our country’s prosperity,” he told reporters before the meeting.

“I have always said to Albertans that I hope our new government can begin our relations with the current federal government in a diplomatic way, but ultimately, we are prepared to use every tool in the legal and political tool box to defend our vital economic interests.”

Kenney added he will tell Trudeau if the bills are passed in their current forms, he will launch a constitutional challenge against them and trigger a constitutional referendum on equalization payments.

Kenney has previously said that would happen on October 18, 2021, the date of the next municipal elections in Alberta. 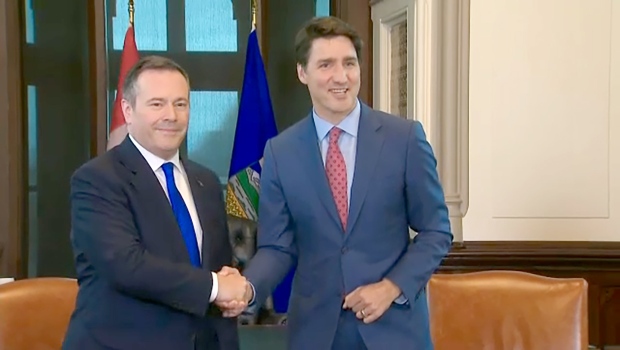 Speaking to reporters after his Senate testimony, Kenney said Bill C-69 in its current form would be a “body blow” to the province’s economy.

“So, more and more Albertans are asking, why are we being dealt with so unfairly? Why does the federal government want to take our tax dollars and redistribute them but not allow us to develop the wealth which pays for those bills,” he said.

“I really believe this bill, if adopted, will be a further body blow to investor confidence in the industry that has been a key engine of our prosperity and will fuel a deep and growing sense of resentment and alienation.”

Former premier Rachel Notley, now the leader of the Official Opposition, travelled to Ottawa before the April 16 provincial election to speak to the Senate Transportation Committee about Bill C-48, telling members to send the bill “straight to the garbage bin.”

“It’s not a tanker ban, it’s an Alberta ban, and let’s stop suggesting otherwise,” she said at the time.