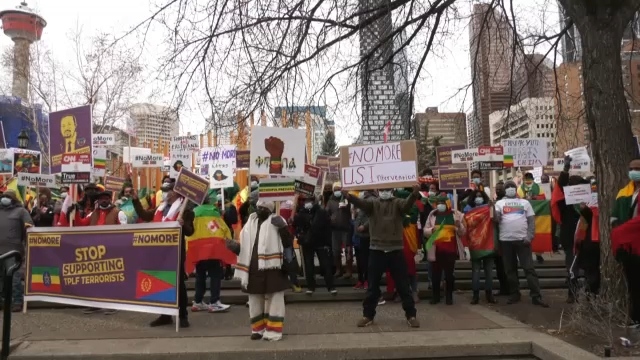 Hundreds of Ethiopian-Canadians protested outside the U.S. consulate in downtown Calgary on Sunday.

The group, participating in a global day of protest, voiced that they do not want the U.S. to interfere in Ethiopia. Many protesters held signs that said, “Hands Off,” and, “No More.”

The country has been plagued by civil war between government troops and the Tigray opposition group called the People’s Liberation Front. The conflict has led to the world’s worst famine crisis in a decade and accusations that the government is promoting ethnic cleansing in the Tigray region.

The Ethiopian prime minister won this year’s election in a landslide victory.

“Usually in Africa, the governments, the leaders are the problems – that’s what Canadians think,” said Solomon Mitiku, protest organizer.