Residents who live near Kensington Road in the northwest are calling on the City of Calgary to decrease the number of lanes at the intersection where an 8-year-old boy was struck by a car in the spring.

Coen Hansen was on his way to school with a group including a friend's parent in late February. The overhead lights were flashing and traffic had initially stopped, but when the boy started to cross an eastbound vehicle struck the boy, launching him approximately two metres.

"Probably one of the scariest moments of my life as a mom," said Jackie Hansen.

An ambulance transported the boy to Alberta Children's hospital but his injuries were very minor and he's fully recovered.

His mother said it could have been worse, and she's speaking out, calling for Kensington Road between Crowchild Trail and 14 Street to be reduced from four lanes down to two.

"It needs to slow down, and I would love for it to have less traffic," said Hansen.

The eight-year-old Hansen wants drivers to "let pedestrians walk first. And slow down."

His dad Wade pointed out that Kensington is hardly the only traffic corridor in the area. 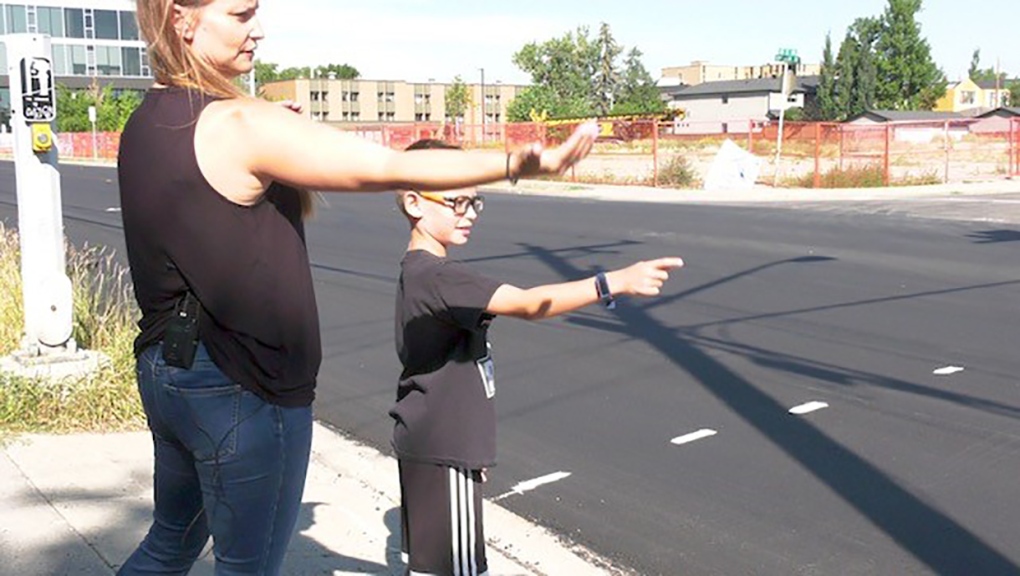 He wasn't badly hurt and has recovered fully, but now his parents want the city to accelerate considerations to reduce the number of lanes along the route and slow traffic down in the residential area.

Another area resident has started an online petition to present to city council.

"I'm asking that the city simply accelerate their plan to turn Kensington Road in this area according to the legion analysis to a single lane in each direction," said Patrick McKay.

The ward councillor for the area says a traffic assessment is being studied as part the Riley Communities Local Area Plan, but it could take up to 18 months before any changes are approved.

"This is front and centre for the Ward 7 office. We've made safe communities one of our pillars for this ward," said Councillor Terry Wong.

He added the West Hillhurst Community Association has a traffic committee with a number of suggestions for the area, including Kensington Road at 18 Street N.W.

The city said there is future potential to reduce Kensington Road N.W. to a single lane per direction.

"Currently Kensington Road’s traffic pattern has one westbound lane occurring between 16 Street and 18 Street N.W., but two lanes elsewhere between Crowchild Trail and 13 Street N.W.," said Surendra Mishra, traffic engineer for mobility with the city in a statement to CTV News.

It continued, "this solution was not possible on the eastbound direction due to the presence of two traffic lanes."

The city installed traffic calming curbs or "bump-outs" on the northern end of the intersection for traffic calming, added extra signage saying "yield here to pedestrians," and more crosswalk signs.

However, Mishra said it would be a more adequate solution to evaluate the overall operation of the road between Crowchild Trail and 14 Street. N.W., including the flow for transit, autos and other modes.

"The city continues to look for opportunities to improve safety for all transportation network users," said Mishra.

"If you are in a built up area and its residential slow down a little bit more give yourself more time to react. Look for pedestrians," said Sgt. Colin Foster, collision reconstruction unit lead.

Foster said pedestrians should look both directions, try to make eye contact with drivers, and allow drivers a chance to slow down before entering a crosswalk.

However, failing to yield to a pedestrian is a traffic offence, he says.

Health Canada says Canadians ages 12 and up can now be given the Pfizer-BioNTech COVID-19 booster vaccine that targets the BA.4 and BA.5 strains of the Omicron variant.

Who is Danielle Smith? UCP leader and Alberta's next premier

The United Conservative Party has placed Danielle Smith, the former leader of the now defunct Wildrose Party, at the helm as it looks to solidify support ahead of the next provincial election.

Putin's path: from pledges of stability to nuclear threats

As he turns 70 on Friday, Russian President Vladimir Putin finds himself in the eye of a storm of his own making: His army is suffering humiliating defeats in Ukraine. Hundreds of thousands of Russians are fleeing his mobilization order, and his top lieutenants are publicly insulting military leaders.

'There'll be no turkey': Sombre Thanksgiving for Atlantic Canadians hit hard by Fiona

The Thanksgiving holiday weekend has been dampened for thousands in Prince Edward Island and Nova Scotia who are still without power -- almost two weeks since Fiona hit on Sept. 24.

September jobless rate falls to 5.2 per cent as fewer Canadians look for work