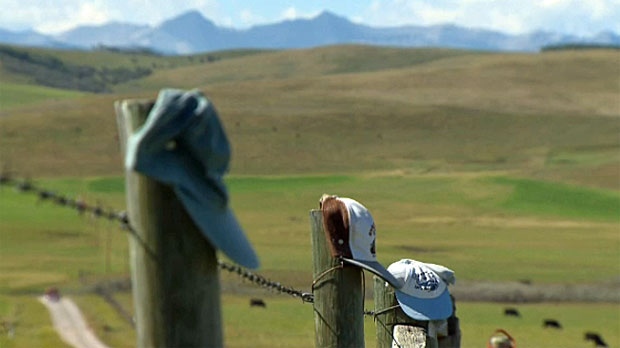 Fuller says locals refer to the fence as a landmark when giving directions to properties in the area.

A southern Alberta farmer has collected hundreds of hats over the last 25 years and has found a unique way to recycle and display them.

Anyone who has ever driven down Highway 22 near Longview has come across the farmer’s fence that has a baseball cap perched on every post.

Lorne Fuller owns the property and is known by his neighbours for his caps and cars.

“In those days when you went to the city the businesses all would give you a cap,” said Fuller.

He didn’t want to throw them out so he started looking for something to do with the stack of caps.

“We had just got back from a trip up to the Yukon and some farmer way up in northern Alberta, he nailed caps onto the fence post so I thought, there’s a place for these blasted caps so I went downtown and got some boys off the street and we come out here and nailed up the caps and that started the caps.”

Fuller has been popping caps onto the top of the posts since the 1990s and now others are contributing to his project. “There would be a bag or a box of caps at the mailbox with a note on it, here's caps for your project good luck."

He now has an entire hat shack that is filled to the brim with ball caps.

Fuller says the caps are a novelty and that visitors often turn up in his driveway to find out the story behind the fence toppers.

“It’s fun to visit with people and I've certainly met a lot of people over this cap thing, you know,” said Fuller.

Fuller’s passion for caps has even been featured in publications from other countries.

He says one family from Holland stopped by and took photos while on vacation and later sent him a copy of a Dutch magazine that featured his famous fence.

(With files from Bridget Brown)