Operating as an independent tribunal under the Criminal Code of Canada, the ARB oversees cases of people who are deemed not criminally responsible (NCR) or found unfit to stand trial because of mental disorder.

“There are critical unresolved issues which are forcing my resignation. I am increasingly feeling used and unheard by Alberta Justice Minister Doug Schweitzer,” she wrote in her resignation letter.

“Every province in Canada is required to establish a review board. The Alberta government has chosen to under-resource and ignore the obvious issues faced by this board.”

A nurse for 13 years before becoming a lawyer — being called to the bar in 1993 — Taylor was appointed ARB chair on Feb. 27 and began her role June 1.

ARB reviews over 200 cases a year

The ARB is made up of psychiatrists, lawyers and community representatives.

“In short, this board is accountable for balancing the safety of the public by maintaining the oversight for the re-integration of some of the most vulnerable and dangerous people in our community,” reads Taylor’s letter.

Hearings are held monthly and the ARB reviews over 200 cases each year.

One high-profile case is that of Matthew de Grood, who was found not criminally responsible in 2016 for the stabbing deaths of five people at a Calgary house party two years earlier.

In early October, the ARB ruled de Grood, who is housed at Alberta Hospital in Edmonton, could begin reintegration into society and, with prior approval, begin taking unsupervised trips into that city.

In her letter, Taylor says despite repeated requests for a meeting with Schweitzer after the decision was announced, he “has been unresponsive and non-committal towards the ARB.” 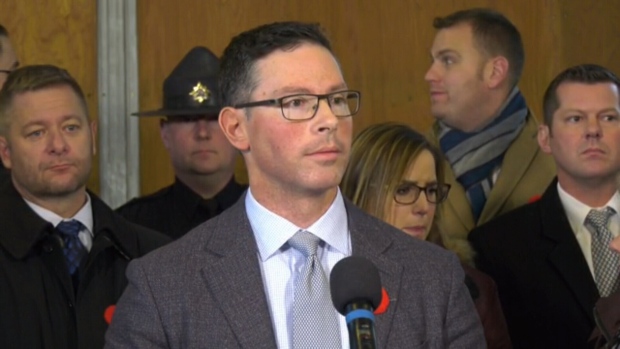 Taylor says she contacted Schweitzer’s office on Oct. 7, requesting a meeting (as similar request was also made in July) however that was ignored, she so contacted her own MLA, Mike Ellis, asking him to contact the justice minister.

In a statement, Schweitzer called the resignation "regrettable," but said he makes "no apologies for standing up for the rights of victims in our criminal justice system."

Schweitzer added Taylor was appointed by the previous government on the eve an election.

"While Ms. Taylor’s sudden resignation is regrettable, I believe this presents an opportunity for a reset whereby the review board can put in place protocols that ensure the maximum possible role for the families and loved ones of victims of crime to participate in the hearing process."

Schweitzer added Taylor was appointed by the previous government on the eve of an election and it was with regret she felt the need to criticize the ministry.

He said he will be speaking to federal Minister of Justice David Lametti to ask that his government conduct a review of the standards of release of those determined to be not criminally responsible.

Other issue identified by Taylor in her letter include:

Taylor previously served as chair of the Hospital Privileges Appeals Board and was active in patient safety policy working groups through the Canadian Patient Safety institute and the Health Quality Council of Alberta.