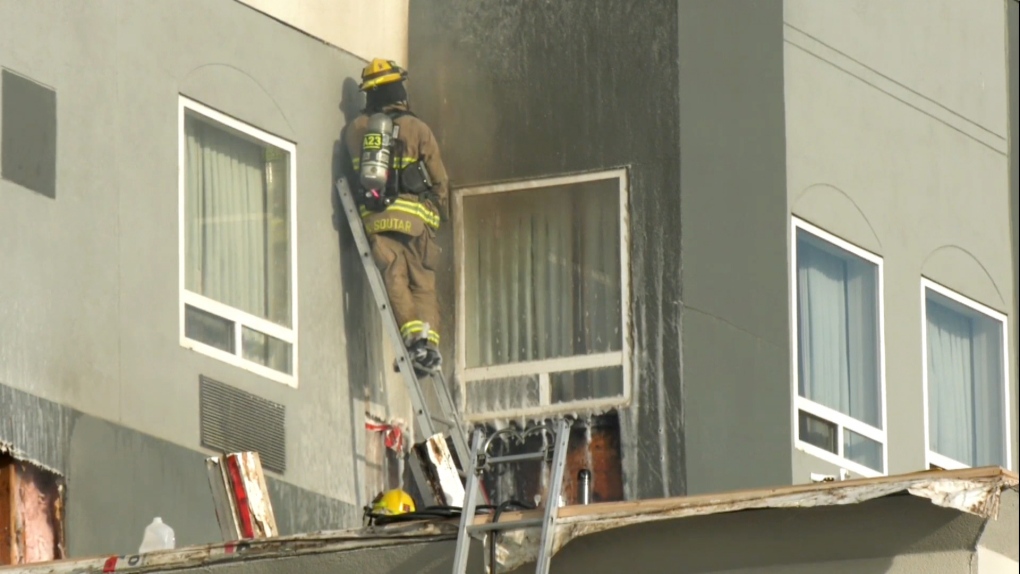 Calgary firefighters used saws and axes to cut into the exterior wall of a northeast hotel after flames were reported by a roofing company working there.
CALGARY -

Calgary Fire Department crews were busy Tuesday afternoon dealing with two separate incidents reported minutes apart, one at a recycling facility in the southeast and another at a northeast hotel.

The first happened just after 1 p.m. when firefighters were called to a recycling facility in the 10300 block of 46th Street S.E. where they encountered flames.

Workers on scene who are trained in fire suppression had already started battling the flames, which were confined to a hopper — a container that holds material.

That meant CFD crews were able to declare it out within 15 minutes of arriving. They believe it was started by an improperly disposed lithium battery.

"Batteries always need to be separated and taken to a different location for safe handling. If they end up in any of the bins (blue, green or black), the batteries can get crushed by equipment leading to fires at the recycling facility, composting facility and landfill sites," read a relaese.

Information on where to properly recycle batteries can be found online, along with informaiton on what materials can be recycled.

About five minutes after the first call, crews were alerted to the Comfort Inn in the 3000 block of 26th Street N.E. by a roofing company and smoke was showing when they arrived.

Firefighters had to use saws and axes to cut into the exterior wall of the building to douse the flames, said Batt Chief Paul Frederick.