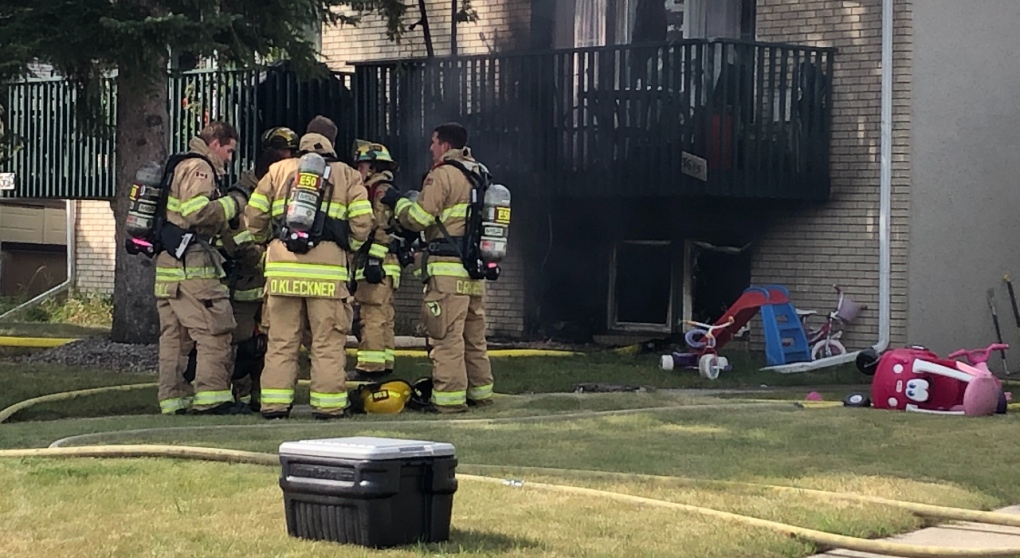 Firefighters attend a call for a basement fire in Calgary's Highland Park.
Multiple residents of a Highland Park fourplex have been displaced in the wake of a Friday morning fire.
Fire crews arrived to the 3600 block of Centre Street N. around 11:20 a.m. and found flames and smoke coming from the building's front, stemming from a blaze in the basement.
According to the Calgary Fire Department, five people in total managed to flee the building as it burned — one from the basement and four from the suite above.
None of the individuals needed to be transported to hospital, the fire department says.
The fire was brought under control and put out, but damage to the suites was extensive enough that neither is considered habitable.
Firefighters were still at the scene as of Friday afternoon and the cause of the blaze was still under investigation.

Health Canada approved on Thursday the use of the Pfizer-BioNTech COVID-19 booster vaccine that targets the BA.4 and BA.5 strains of the Omicron variant. It is the second combination vaccine greenlighted by Health Canada's vaccine review team, but the first that targets the virus strains that are now most common in Canada

The battle to save a part of Juno Beach in France from development is over after the Canadian government announced it would pitch in to buy the land and prevent the construction of a condo on the historic battlefield.

Who is Danielle Smith? UCP leader and Alberta's next premier

The United Conservative Party has placed Danielle Smith, the former leader of the now defunct Wildrose Party, at the helm as it looks to solidify support ahead of the next provincial election.

What are BA.2.75 and BQ 1.1? The two emerging COVID-19 subvariants raising concern among infectious disease experts

Two new subvariants of the Omicron strain of COVID-19 identified in recent months could fuel increased cases and hospitalizations in Canada through the fall and winter, infectious disease experts say.

An Ottawa police officer pleaded guilty to misconduct for donating money to 'Freedom Convoy' fundraisers during the protest in downtown Ottawa.

Teachers will soon be asked to teach toothbrushing 101 in Quebec, raising workload concerns

A tooth-brushing program that is soon to be phased in across Quebec in elementary schools is raising concern among teachers because they’ll be the ones called upon to supervise the students as they clean their teeth.

The number of people hospitalized with COVID-19 has reached a two-month high in Ontario, as most public health indicators now point to a fall resurgence of the virus.