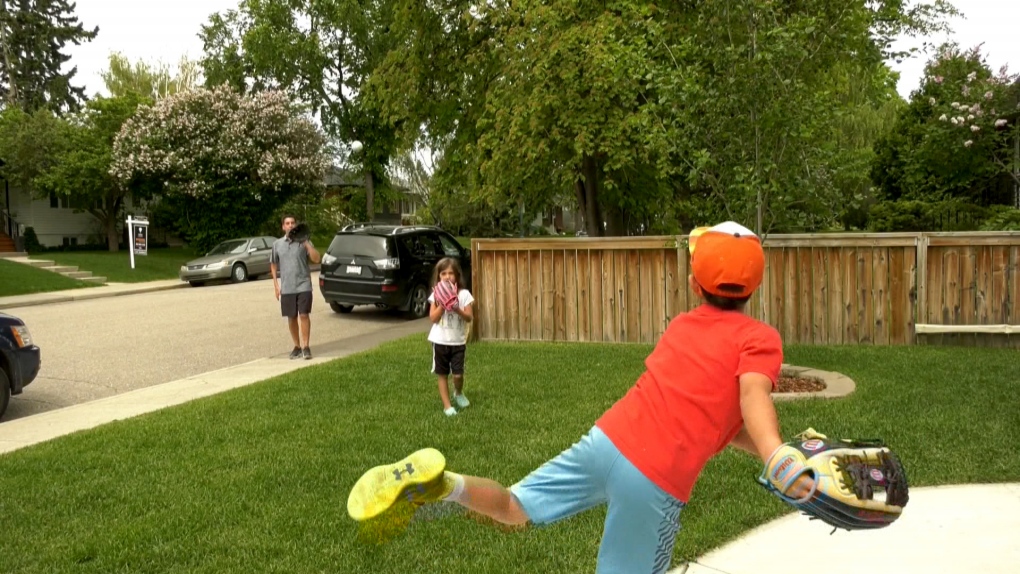 CALGARY -- After being diagnosed with ALS, Calgary Flames assistant general manager Chris Snow appreciates every minute he gets to spend with his family.

He never takes it for granted.

He also appreciates recent fundraising efforts — similar to the Ice Bucket Challenge — that have been taking social media by storm, in his honour.

On Monday Snow was tossing the ball around with his children, eight year old Cohen and five year old Willa.

Just over a year ago, he didn’t think he was going to be able to do that.

He says he’ll never forget that day, when a doctor told him he had ALS.

"He looked at me and said this is the early stage … and you just sink," he said.

"You think your life is over because it really is. At least until now, in every case, it's a no hope disease."

About 3,000 Canadians currently live with ALS. It’s a rapid and always fatal neurodegenerative disease that typically hits those aged between 55 and 65.

Chris is just 38 years old and ALS runs in his family. His dad, two uncles and a cousin all passed away from it.

The Snows have the most aggressive sub-type of the disease. Chris was given just 12 months to live.

But he and his wife Kelsie weren’t about to give up. Kelcie did the research and Chris was enrolled in a gene therapy clinical trial.

Kelcie says that gave them hope.

“You know when I asked the doctor, 'is it possible this could stop their progression entirely?' and he said, 'we don’t know but it’s not outside the realm of possibility,'" she said.

"We held onto that and we keep holding onto that."

Chris says so far it’s appears to be working.

“My right hand, it doesn’t really do anything for me. But it hasn’t since I enrolled in the trials. I didn’t see that as a form of progression because that was already gone," he said.

“My upper arm on that side remains very strong. I can lift and hold my kids with that. Just have to catch them right way.”

June is ALS awareness month. And Snow and the Flames came up with a unique idea to help raise money to fight the disease.

It’s called Trick Shot for Snowy and has taken twitter by storm. Snow says he’s been loving all of the creativity.

“It’s like the ice bucket challenge but it’s fun," he said. "You get to show off a little bit. And do things that are either skillful or ridiculous. And social media has the ability to reach so many people at this point in time."

So far, Trick Shot for Snowy has raised more than $150,000. Chris says all the money raised will be put toward the best research they can find in Canada.

Kelcie says she couldn’t be more proud of her husband.

“You know in some ways it’s like he was made for something like this," she said. "He’s so positive and he always finds a way to get by and to keep going and smiling."

Just over a year ago Snow thought he was given a death sentence. On Sunday, Father’s Day, he hiked a mountain with his family.

Thank you for the challenge ⁦@MattStajan18⁩ and Willa Snow! I’m challenging ⁦@jamiemclennan29⁩ and ⁦@ryanleslie⁩.
Show us your #TrickShot4Snowy and donate at https://t.co/VROtP5741f!
Thanks for the help @janko61, Stoney, Dube, and Phillips! pic.twitter.com/6OJ0P2bOeL

Complete a trick shot, make a donation, and help support the fight against ALS.

Thanks @JDfromCJAY and @CTVStanfield for the nomination. Still in my work clothes, I stopped by my local community centre to do a #TrickShot4Snowy. I nominate @CTVGCampbell, Jocelyn Laidlaw, and @PetethePlumber8. Donations: https://t.co/L0KizLc68I. #yyc #ALS pic.twitter.com/FPtCgyfZOi