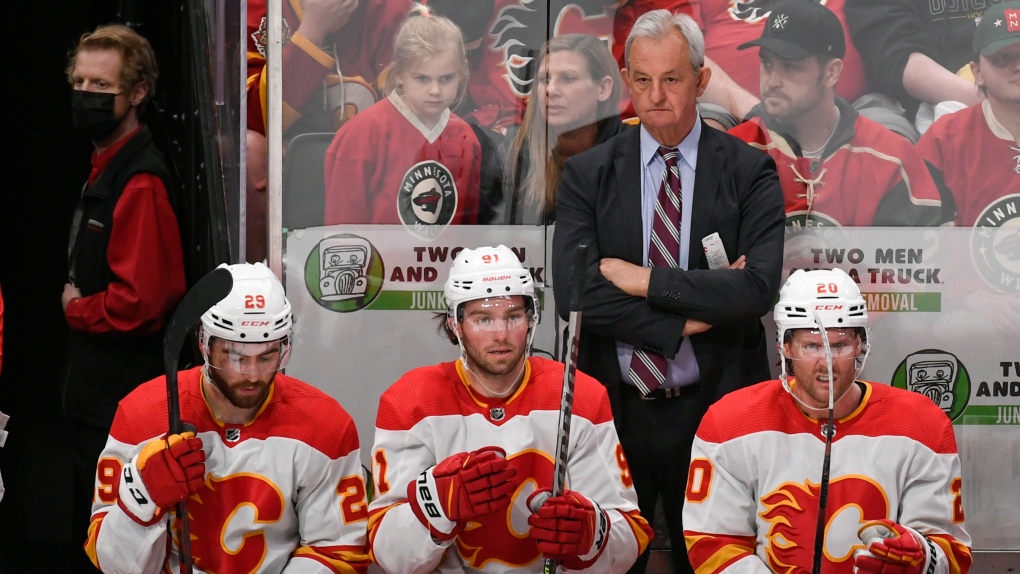 Calgary Flames coach Darryl Sutter stands behind Dillon Dube, Calle Jarnkrok and Blake Coleman, from left, as he watches during the first period of an NHL hockey game against the Minnesota Wild on Thursday, April 28, 2022, in St. Paul, Minn. The Wild won 3-2 in overtime (AP Photo/Craig Lassig).
CALGARY -

Most Calgary Flames players lack Game 7 experience in the NHL playoffs, but their coach doesn't.

Darryl Sutter owns the best all-time record among NHL head coaches at 7-3 in best-of-seven series that reach a Game 7 finale.

His 11th Game 7 will come Sunday when the Flames and Dallas Stars close out their conference quarterfinal at the Saddledome.

The 63-year-old from Viking, Alta., will move to the top of the list ahead of Claude Julien, Mike Keenan and Mike Babcock, who all have 10.

The Flames haven't played a Game 7 in a series since 2008. Ten players in Calgary's current lineup have never won a playoff series, while all but four Stars have done so.

Included in Sutter's Game 7 record is a win and a loss when he coached Calgary to the Stanley Cup final in 2004.

The Flames beat the Vancouver Canucks in overtime in the opening round to advance, but lost to the Lightning in a Cup final that went the distance.

“I've been through a lot of them,” Sutter acknowledged Saturday. “I've been through them here. The last time this team went the finals, we lost a Game 7, but to get to that Game 7, you had to win in a Game 7.”

Sutter returned to the Flames just over a year ago. He navigated the Flames (50-21-11) to the top of the Pacific Division in his first full season back behind Calgary's bench.

So there's considerable weight on the Flames to close out the series with a win at home Sunday and get past the first round for just the second time since that 2004 Cup final.

The Stars doubled the Flames 4-2 in Friday's Game 6 at American Airlines Arena to even the series and send it back to Calgary for a high-stakes conclusion.

Due in large part to the work of Dallas goaltender Jake Oettinger and Calgary counterpart Jacob Markstrom, the series has been low-scoring. The Flames produced seven even-strength goals while the Stars had six over the first six games.

“This series deserved to have a Game 7,” Sutter said.

Stars coach Rick Bowness said the forward passed concussion protocol, and a lower-body injury kept him on the bench in the third.

No penalty was called on the play, yet Zadorov was summoned to an NHL Player Safety hearing Saturday for an illegal check to the head.

No supplementary discipline was issued.

There was significant head contact, the NHL said in its ruling, but Zadorov took the proper angle of approach, did not extend outward or upward, and hit through Glendening's core. Head contact was deemed unavoidable.

“It was a hockey play,” Sutter said. “I totally disagree there should be a hearing considering there's been slewfoots in this series.”

“He'll see doctors and get some treatments today,” the coach said.

The Stars' most recent Game 7 was also in Alberta two years ago in Edmonton's playoff bubble. Dallas scored in overtime to beat Colorado 5-4 and advance to the Western Conference final.

Winger Milan Lucic is the most experienced Flame in seventh games with a 4-6 record in 10 appearances.

“You remember when you're a kid and you're about to run a big race, and you feel like you get punched in the stomach right before you start. It's that kind of feeling.

“You want to bottle that up and put it in to a positive thing. This is a time when big players make big plays and get it done.”

When it comes to the pressure of a Game 7, Sutter embraces standing in the eye of the hockey hurricane.

“It's a quiet place,” the coach said. “I love that part of it. It's like being in the middle of it and I've always enjoyed it.”

This report by The Canadian Press was first published May 14, 2022.

Alberta Premier Jason Kenney is urging the U.S. government to convince Michigan to abandon its legal campaign against the Line 5 pipeline.