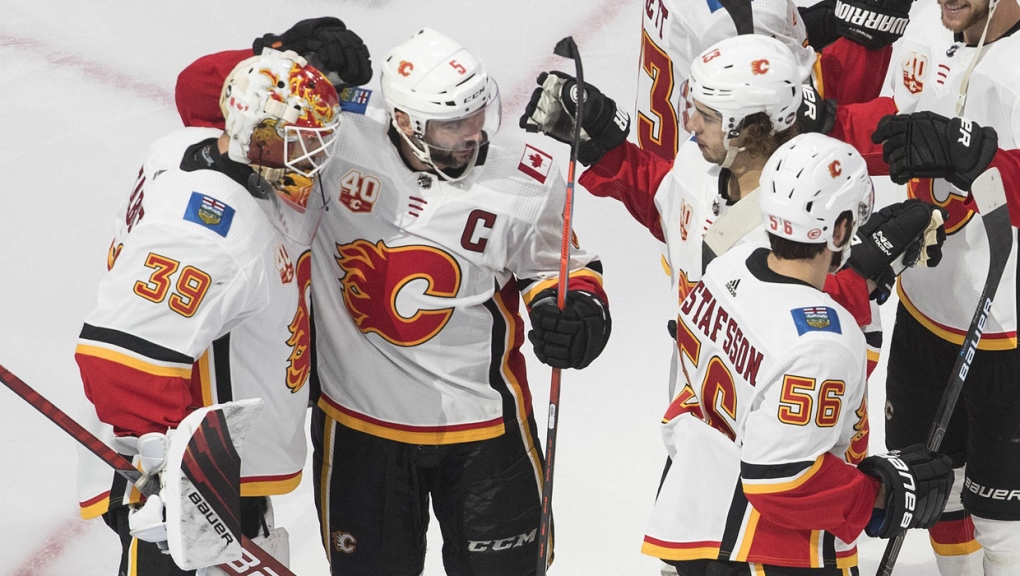 EDMONTON -- Milan Lucic used his fists as a metaphor, knocking down the Winnipeg Jets at the drop of the puck Thursday before his Calgary Flames proceeded to knock them out of the NHL playoffs.

The Flames defeated the injury-riddled Jets 4-0 at Rogers Place to win their qualifying series three game to one and move on to the round of 16.

Lucic said Jets defenceman Nathan Beaulieu tried to set the tone at the opening faceoff by challenging him to drop the gloves. Lucic proceeded to pummel him to the ice.

“I was lining up for the draw and he came over and asked me,” said Lucic.

“For me, you just want to show that you're ready to play and you're not going to back down from their push.”

Dillon Dube, Sean Monahan, Sam Bennett and Rasmus Andersson scored for the Flames while Cam Talbot made 31 saves for the shutout.

Connor Hellebuyck stopped 30-of-32 shots in net for Winnipeg.

It was a series the Jets were chasing from the get-go, when they lost elite scorers Patrik Laine and Mark Scheifele to injury in Game 1, and two other top point-getters Blake Wheeler and Kyle Connor failed to step up to fill the void.

Wheeler and Connor, the regular season team leader with 38 goals and 73 points, combined for just two assists in four games.

Wheeler said the loss of Laine and Scheifele was critical.

“The guys that played this series, there's nothing left in tank,” he said.

“Our team left it all out there.”

“Their goalie made some big saves, and it just wasn't meant to be.”

Calgary, meanwhile, had scoring up and down the lineup and kept the Jets on their heels for the most part with a relentless forecheck.

The Flames struck first Thursday before the game was four minutes old.

Dube, battling in front of the Jets net against Nicholas Shore, got off a shot that Hellebuyck stopped, but Dube got his own rebound and flipped it up and in.

The Jets fought back, outshooting Calgary 11-8 in the frame, but went down 2-0 with less than a second to go when Bennett pounced on a rebound off an odd-man rush to knock the puck past Hellebuyck.

The Jets made sporadic attempts over the final two periods to get back in the game, only to have Talbot stay square to the shooter and shut the door.

Monahan and Andersson scored empty-net goals in the dying minutes to seal the victory.

It was the only all-Canadian matchup of the eight qualifying series.

Calgary won the opener 4-1, lost Game 2 by a 3-2 score, then rebounded to beat Winnipeg 6-2 in Game 3. The games were all played without fans in the stands at Rogers Place, which is hosting the Western Conference tournament, keeping players in isolation to avoid contracting COVID-19.

Calgary is the first team through in the expanded Western Conference post-season tournament and will play one of the top four seeds in the round of 16: the Colorado Avalanche, St. Louis Blues, Dallas Stars or Vegas Golden Knights

Calgary will get a chance to redeem a crushing first-round playoff exit last spring at the hands of the Avalanche despite topping the Western Conference with 50 wins in the regular season.

There was also controversy and disruption in November, when Geoff Ward was promoted from associate to interim head coach after Bill Peters resigned amid allegations of misconduct, including directing racial slurs at a player when he was a coach in the American Hockey League.

Goaltending was a question mark heading into the series, but Talbot, understudy to David Rittich in the regular season, outplayed him in the exhibition game before the tournament and played every minute in the series.

The tenor of the series shifted dramatically in the first five minutes of Game 1, when Scheifele (29 goals, 73 points in the regular season) got his leg twisted up with Tkachuk along the boards, and fell to the ice in pain and had to be helped off.

Laine later appeared to injure his wrist and bottom-six forward Mason Appleton was also hurt and never reappeared in the series.

Hellebuyck played well but the Vezina Trophy nominee was not at level needed to steal some games.

One bright spot for Winnipeg was Nicolaj Ehlers. Ehlers (25 goals and 58 points in the regular season) got the playoff scoring monkey off his back. He tallied in Game 2, his first goal in 23 post-season games, then added another in Game 3.

This report by The Canadian Press was first published on Aug. 6, 2020.