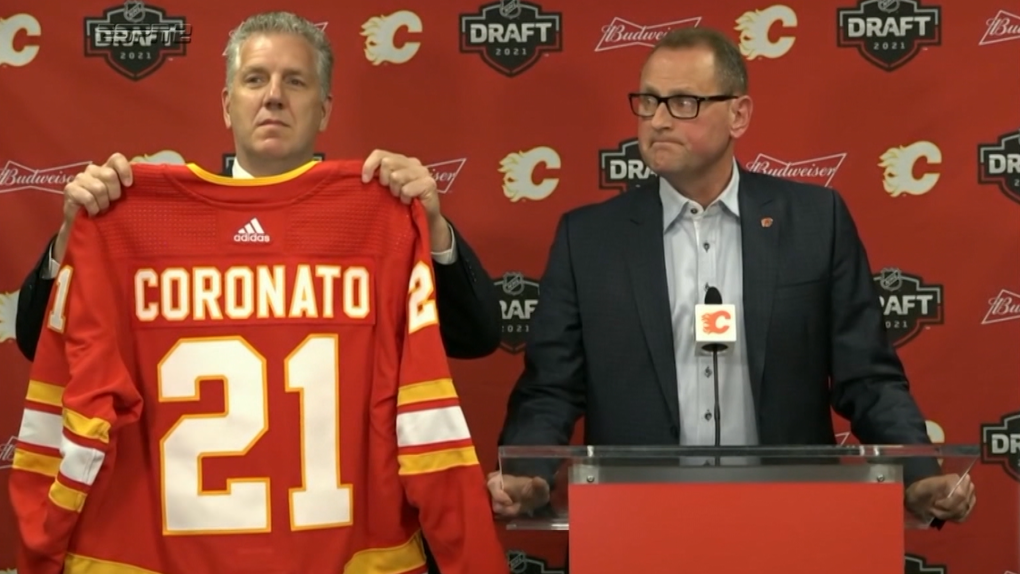 The Calgary flames have come away with eight new prospects following the 2021 NHL draft, covering a range of positions.

The team began by acquiring Matt Coronato in the first round Friday, they had the 13th pick.

In the second round, the Flames took left winger William Stromgren, he comes from MoDo of the Swedish League.

Calgary got a pair of players from the QMJHL in the third round. Centre Cole Huckins and defensemen Cameron Whynot went 77th and 89th.

Without any picks in the fourth round, the Flames chose defenseman Cole Jordan, from the Moose Jaw Warriors, in the fifth round.

The team had traded their 84th pick, in the third round, to L.A. for that 89th pick and a pick in the sixth round where they got right winger Jack Beck. They also got left winger Lucas Ciona five picks later, from the Seattle Thunderbirds of the WHL.

In the seventh round, the Flames picked up goalie Arsenii Sergeev, from the NAHL’s Shrevenport Mudbugs.

The draft is over, but the Flames GM doesn’t think the winners of the draft can really be picked yet.

“The reality is now you wait,” he said Saturday after Calgary added eight names to its prospect pool. “Everyone's happy on draft day.

“Now you wait for a period of time for these players to go through the development process.”

General managers, scouts and players have all said for weeks they expected an unpredictable 2021 NHL entry draft after COVID-19 restrictions cancelled games or entire seasons, and prevented scouts from checking out talent in person.

What the pandemic hasn't changed, though, is talent, Treliving said.

“The good players will always rise to the top and there'll be a lot of people, I think, next year at this time going `Geez, this guy got picked there when he's this type of player.”' Treliving said. “So I think it'll be interesting to follow the progression of this draft.”

There were 223 players from 14 countries and 38 leagues chosen by NHL teams during the 2021 draft.