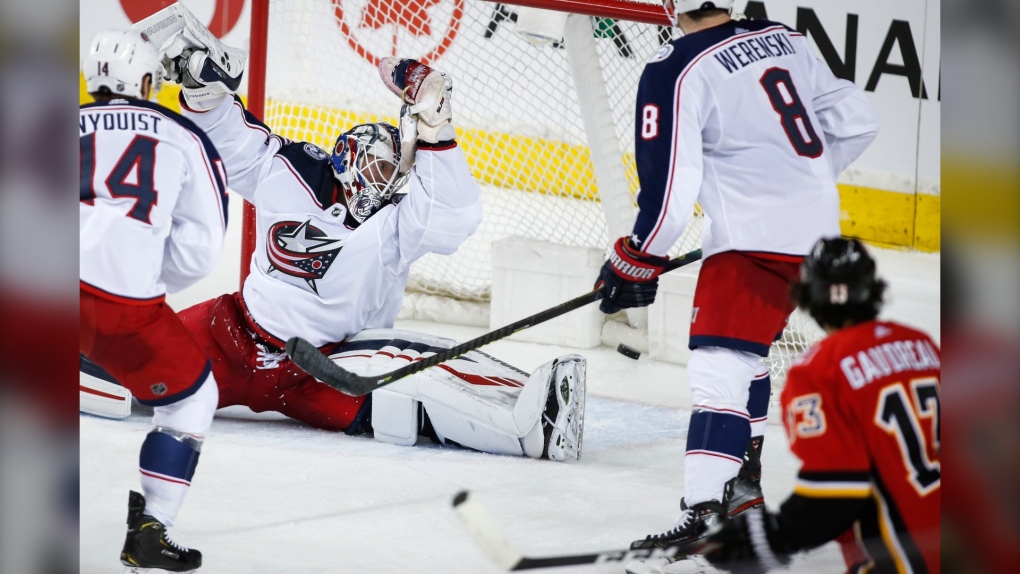 CALGARY -- The Calgary Flames rescued two precious points in their pursuit of the playoffs and made their home record a little more respectable Wednesday.

Trailing 2-0 after two periods, Calgary battled back to beat the visiting Columbus Blue Jackets 3-2 in overtime.

Blue Jackets goaltender Joonas Korpisalo had lost his stick and was unable to get a glove on Brodie's wrist shot from the high slot.

Calgary (35-26-7) continued to cling to third place in the Pacific Division just ahead of five teams jockeying for Western Conference wild-card berths.

"We're desperate right now," Flames captain Mark Giordano said. "We know where we are in the standings. Every night is huge. Your nights off, you see teams winning around you. When you play you've got to make it count.

"The effort was there all night. Sometimes it doesn't look as good from up top because the other team is doing a pretty good job out there too."

Elias Lindholm and Matthew Tkachuk scored third-period goals for the Flames to force OT. Cam Talbot stopped 20 shots for the win and is 8-3-1 since Jan. 1.

Columbus earned a point and continued to hold a wild-card berth in the Eastern Conference.

Korpisalo turned away 34 shots in the loss. The Finn is 2-2 since returning from a knee injury and surgery that sidelined him for eight weeks.

At the start of a five-game homestand, the Flames improved their record at the Saddledome to 14-13-4.

"I think there's been such an emphasis being talked about how we can't play at home, how we suck at home, how we're terrible at home," Calgary head coach Geoff Ward said.

“That's all we've been hearing around home for a while now.

"Probably the fact we were able to break through and do what we did tonight, it can be more of a confidence builder for us than maybe in a different situation when the emphasis wasn't so much on how bad we are at home."

Forwards Oliver Bjorkstrand (ankle) and Nathan Gerbe (groin) are also out, while goaltender Matiss Merzlikins is day-to-day with an upper-body injury.

"Don't even start talking about injuries," Blue Jackets head coach John Tortorella said. "This has nothing to do with it.

"We've been doing this for three months and we have found a way to win games. We need to continue to stay with it.

"We need to get some guys that I think can bring more offence to do that more consistently without sacrificing some of the things we need to do above the puck."

Lindholm kicked off Calgary's comeback at 11:14 of the third period. Giordano threaded a shot through traffic for Tkackuk to re-direct for the equalizer at 18:17.

Tkachuk was hobbled four minutes into the first period blocking a shot, but the winger remained in the game despite looking uncomfortable.

"It's important for us to come and take care of business here at home, which we haven't done as of late, but hopefully we can turn it around," Tkachuk said. "This is a big month of a lot of home games."

Calgary is at home Friday to the Arizona Coyotes. The Blue Jackets head to Edmonton to face the Oilers on Saturday.

Notes: Flames forward Derek Ryan skated in his 300th career NHL game Wednesday . . . Shore's goal was his first for the Blue Jackets since he was acquired at the Feb. 24 trade deadline . . . Defencemen Erik Gustafsson and Derek Forbort played their first home games as Flames since the trade deadline.

This report by The Canadian Press was first published March 4, 2020.