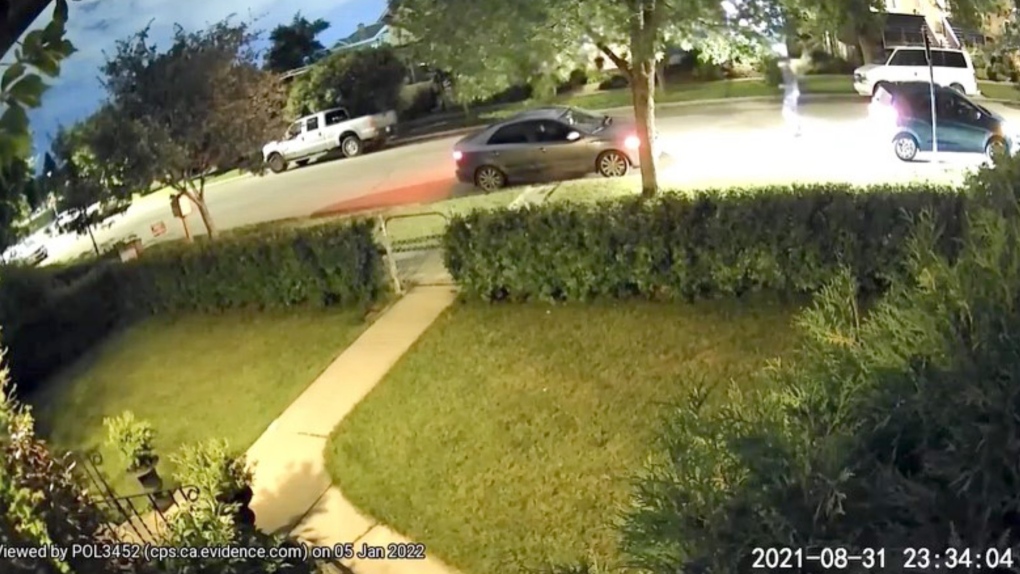 CCTV image of a stolen Chevy Spark, top right, being abandoned in the community of Renfrew, and a male suspect walking away from the vehicle. He got in the vehicle in the centre of the image and drove away. (Calgary police handout)

Calgary police has released CCTV footage of a Chevrolet Spark being stolen from a southwest neighbourhood that was used two weeks later in a northeast shooting in August before being abandoned.

Police also released surveillance footage of the car being dumped.

Members are the public are being asked for help to identify two suspects — a man and a woman — involved in the theft, along with a third suspect who was driving another vehicle and is thought to have helped them.

A homeowner in the 0-100 block of Patterson Blvd. S.W. called police about 1 a.m. on Aug. 2 to report his turquoise Chevy Spark had been stolen.

Officers attended and obtained CCTV footage from a neighbour, which appeared to show suspects moments before the car was boosted.

The female suspect is described as having a medium build and was wearing black or dark coloured runners, leggings, a baseball cap and a hooded sweater with the hood up over the cap.

Police believe a third person was with them when the car was stolen, parked nearby in a dark coloured SUV or van.

Then on Aug. 19, police were called to the 200 block of 11th Avenue N.E. about 9 p.m. for reports of a shooting, and located a man suffering gunshot wounds.

"Investigators quickly identified two vehicles believed to be in the area at the time of the shooting, a silver Nissan Versa and a turquoise Chevrolet Spark," police said in a release.

"We now believe that the occupants of the Chevrolet Spark during the above shooting may be the suspects wanted in the vehicle theft and may also have information about the Crescent Heights shooting."

The Spark was later abandoned in the community of Renfrew on Aug. 31 and police obtained surveillance footage of a man getting out of the vehicle.

Anyone with information about the car theft suspects, the unseen suspect vehicle, the individual who exited the stolen Chevrolet Spark, or the Crescent Heights shooting is asked to call the police non-emergency line at 403-266-1234 or Crime Stoppers at 1-800-222-8477.