'For the greater good': Indigenous financial advisor works to empower others 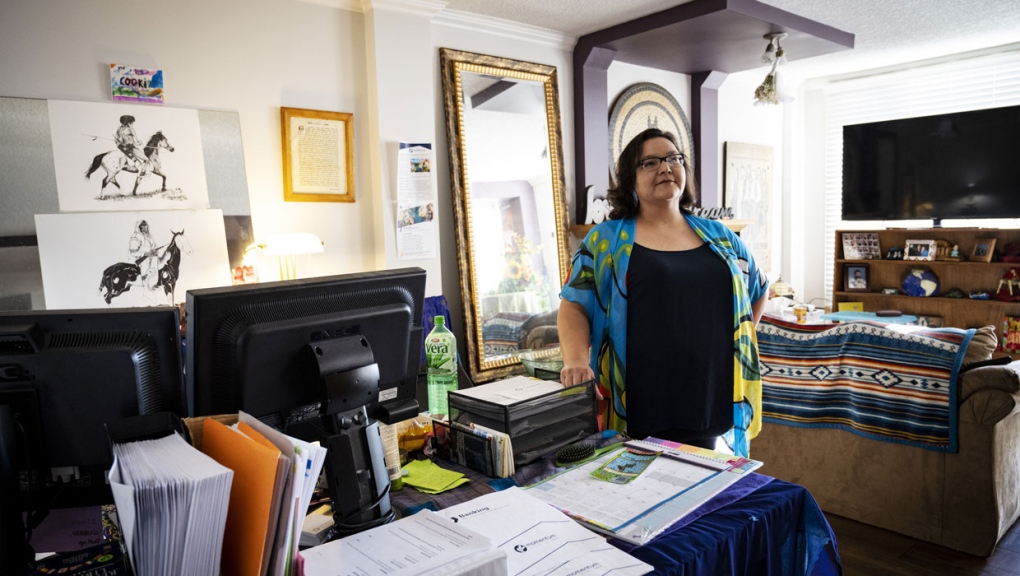 Theodora Warrior poses for a photo in Calgary, Alta., Friday, Nov. 19, 2021. Theodora Warrior is an Indigenous financial facilitator who grew up in poverty and is now helping to empower people in her community to manage their money. THE CANADIAN PRESS/Todd Korol
CALGARY -

It's often said that every name tells a story.

For Theodora Warrior, that couldn't be more true.

“My name doesn't lie,” says Warrior, a Blackfoot member of the Piikani Nation in southern Alberta. “The purpose of a warrior is not meant for battle. They are meant for protection and sacrifice for all for the greater good.”

Jeff Loomis, executive director of Momentum, says it's committed to having a role in reconciliation with Indigenous communities and bringing Warrior onboard ensures a culturally relevant and supportive environment to aid in financial reconciliation.

Warrior views her job as one that empowers others, particularly Indigenous families such her own who experienced poverty as a result of the residential school system.

About two years ago, Warrior attended a money management workshop hosted by Momentum, similar to one she now teaches, and was asked to write down a vision for her future.

She had lost everything - her house, job and belongings. She says it was a cycle she had repeated for years, from housed to homeless, employed to jobless, hopeful to disheartened.

Her vision on a piece of paper, now tucked away in a safe spot, listed 17 goals, including having a two-bedroom apartment, a healthier mental state, being debt-free with savings and having a steady job.

Most of those dreams came true.

Warrior is now bringing the program that helped change her life to other Indigenous people in Alberta communities. She calls the workshop series Money Moccasins.

Thinking about the workshop she attended, Warrior says the information was helpful but the facilitator, who was white, lacked an understanding of unique barriers faced by Indigenous people.

The facilitator talked about spending $200 on plants, almost the same amount Warrior had received monthly on welfare.

“It had nothing to do with where we come from, what we really encounter, what we have to work with,” says Warrior.

As a child, she remembers living in apartments with cockroaches, using food banks and moving frequently, both on and off reserve. Her mother, who has three university degrees, often worked multiple jobs.

Warrior says she believes the repercussions of the residential school system left her mom struggling to find financial stability.

As Warrior became an adult, she also had trouble staying afloat.

There were months when she had money from working in the trucking or hydrovac industries. At one point, she had a five-bedroom house and was financing a new vehicle.

But, she says, everything fell apart in about nine months when a friend moved out without paying their share of the bills and work opportunities disappeared.

When looking for a place to live, she says she faced encounters with landlords who hurled racist and prejudicial comments. Sometimes she left showings in tears.

Warrior says she stayed in women's shelters and slept in empty apartments.

“I've been through it all,” she says. “Homeless. Hitchhiking. Food banks. Relying on the kindness of strangers ... the depression that comes with it, domestic violence, alcoholism, addiction.”

She says she openly shares her experiences now with those in Money Moccasins. She remembers one participant who laughed when Warrior told the class she was in bankruptcy.

“'Who better to learn from than somebody who's been there?' Warrior recalls telling the woman. ”Being open and vulnerable with them like that drops their guard.“

Warrior keeps a constant reminder of how far she's come at her desk. Her computer screensaver shows Warrior looking into the distance with her sprawling First Nation behind her.

The photo was taken the day before she lost her driver's licence for drinking. Shortly after that, in 2019, she attended her first class at Momentum and got a job with the charity.

She describes her Money Moccasins program, which started this year and explores assets, budgeting, banking, credit and consumerism, as generation changing.

“In this Western world, money is life. In our world, water is life,” says Warrior.

“This course, these classes, they give you something to hold that water. They show you that you can save your water, that your water is meant to be saved for the next generation.”

This report by The Canadian Press was first published Nov. 28, 2021.