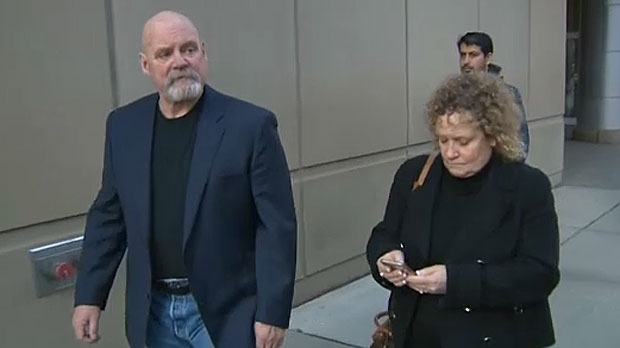 Steve and Heather Walton, seen in this file photo, were sentenced Wednesday for their role in a campaign of harassment against a mother during a child custody dispute.

CALGARY — Steve Walton was taken into custody Wednesday after a judge sentenced the former Calgary police detective for his role in a campaign of harassment against a mother during a child custody dispute.

Walton, who ran a private investigation firm with his wife, was given a three-year prison term for convictions of criminal harassment and bribery.

Heather Walton, a former civilian member of the force, was given a 15-month conditional sentence to be served in the community, under 24-hour house arrest. The judge also ruled she must complete 175 hours of community service.

The Waltons’ firm was hired by wealthy Calgary businessman Ken Carter to dig up information and follow his ex, Akele Taylor, while they were in a bitter custody dispute.

The Waltons then hired police officers to access internal CPS databases. The officers were also paid to stalk and harass Taylor.

The case stemmed from a harassment complaint in 2014.

The Waltons and Carter were convicted by a jury in October 2018.

Steve Walton was found guilty of criminal harassment, bribing an officer and improper storage of a firearm.

Heather Walton was convicted of bribery and improper firearm storage. A mistrial was declared on the charge of criminal harassment because a jury was undecided.

Carter has yet to be sentenced, he remains in Russia with an undisclosed medical issue, preventing him from flying.

The case was delayed multiple times as the court waited for information on when Carter would return to Canada, but the judge determined they would be sentenced separately.

In an earlier trial, three other officers, Bryan Morton, Bradford McNish and Anthony Braile, hired by the Waltons were convicted for their roles.

Morton and McNish are out on bail pending conviction and sentence appeals. The crown has appealed Braile’s 90-day sentence.

Steve Walton and Carter were scheduled for a separate perjury trial scheduled to begin next month, but that has been postponed.