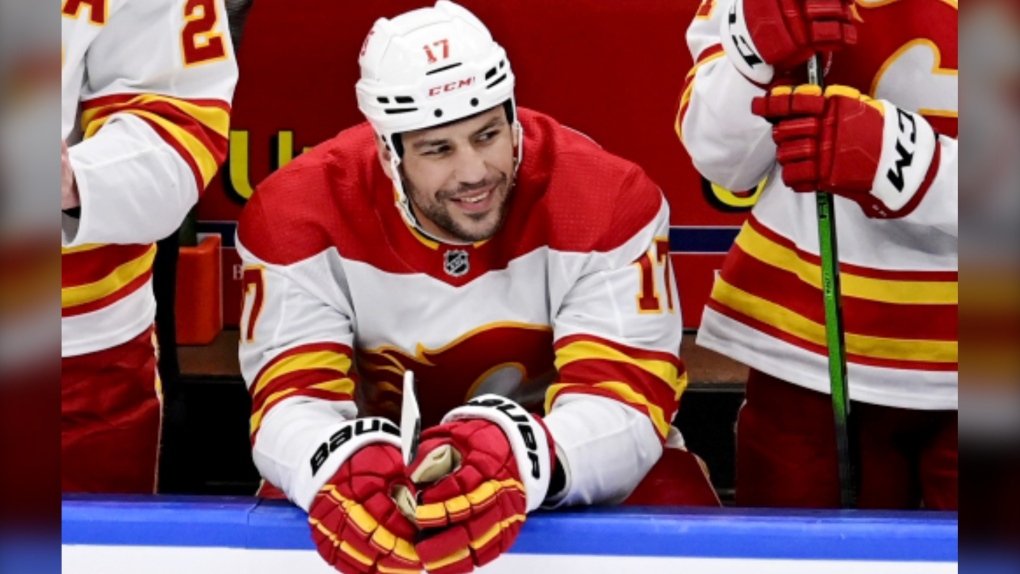 Calgary Flames' Milan Lucic (17) smiles on the bench as he is recognized for playing in his 1,000th NHL game during first period NHL hockey action against the Toronto Maple Leafs in Toronto on Tuesday, April 13, 2021. (Frank Gunn/The Canadian Press)

TORONTO -- Johnny Gaudreau scored 36 seconds into overtime as the Calgary Flames defeated the Toronto Maple Leafs 3-2 on Tuesday in the ninth and final meeting between the teams this season.

Elias Lindholm, with a goal and an assist, and Juuso Valimaki scored in regulation for Calgary (18-21-3), while Jacob Markstrom made 24 saves. Flames winger Milan Lucic played the 1,000th regular-season NHL game of his career. Guadreau also tacked on an assist.

Zach Hyman, with a goal and an assist, and Alexander Kerfoot replied for Toronto (28-11-4). David Rittich, who was traded by the Flames to the Leafs late Sunday and was still sporting red gear, stopped 25 shots against his former team. John Tavares added two assists.

Toronto lost for the second time in as many nights after losing 4-2 in Montreal on Monday to snap a 9-0-1 run, while Calgary won has now two straight for the first time since mid-March.

The Leafs finished 6-2-1 against the Flames in 2021 and remain six points up on the Winnipeg Jets for first in the North Division.

On the winner, Gaudreau took a pass from Lindholm and undressed Rittich with a nice move for his 15th goal of the season.

The deal for Rittich — Toronto shipped a 2022 third-round pick to Calgary — was just one of the trades made ahead of Monday's deadline by Leafs general manager Kyle Dubas, whose other moves included acquiring forwards Nick Foligno and Riley Nash from Columbus, and defenceman Ben Hutton from Anaheim.

Rittich, who blanked his new team 3-0 on Feb. 22 at Scotiabank Arena and had a .941 save percentage in four starts against the Leafs in 2021, flew on the Flames' charter to Toronto on Monday because of COVID-19 restrictions related to commercial travel.

“There was definitely some fun happening there as far as pokes and jabs,” Lucic said with a smile Tuesday morning. “With the circumstances, you don't ever really experience something like that ... flying with an ex-teammate or somebody on another team.

“It was kind of nice and cool to have around for a little bit (longer) and be able to properly say goodbye.”

The visitors snapped a 1-1 tie 34 seconds into the second period with Mitch Marner in the box for tripping when Lindholm took a pass from Matthew Tkachuk and wired his 11th past Rittich.

Markstrom made his best save of the night early in the third with a desperation effort at full stretch on Marner, but the Leafs got their equalizer at 6:17 when Kerfoot scored his seventh off a pass from Tavares.

The Leafs' power play — an inexplicable 1-for-36 over Toronto's last 15 games — got its first chance midway through the period when Rasmus Andersson was assessed a double-minor for high-sticking, but couldn't generate much of anything until Tavares hit the post late in the man advantage.

Calgary, which beat the Edmonton Oilers 5-0 on Saturday to snap a 1-8-0 slide before dealing centre Sam Bennett to Florida ahead of the deadline, opened the scoring at 4:37 of the first when Lucic found a wide-open Valimaki in front to score his second.

Lucic, who took a couple solo laps in warmups before being joined by teammates, got an ovation from both benches during the first TV timeout to acknowledge the 1,000-game milestone.

“I've been fortunate enough to have some special people in my life,” Lucic, the 50th pick in the 2006 draft by Boston, said after the morning skate. “You've got to live in the moment, you've got to enjoy the moment.”

Toronto got even at 10:37 when Morgan Rielly's shot off the end boards bounced to Hyman for him to pop his 15th upstairs on Markstrom. Rielly's assist was the 300th point of his career, making him the sixth Toronto defenceman to reach that mark.

Lucic and Scott Sabourin, who made his Leafs debut and played his first NHL game since March 11, 2020, dropped the gloves off the ensuing faceoff at centre, with the Flames winger needing repairs for a cut above his right eye.

Tkachuk then gave Rittich a snow shower late in the period, prompting the Toronto goalie lash out at his former teammate before a minor scrum ensued.

This report by The Canadian Press was first published April 13, 2021