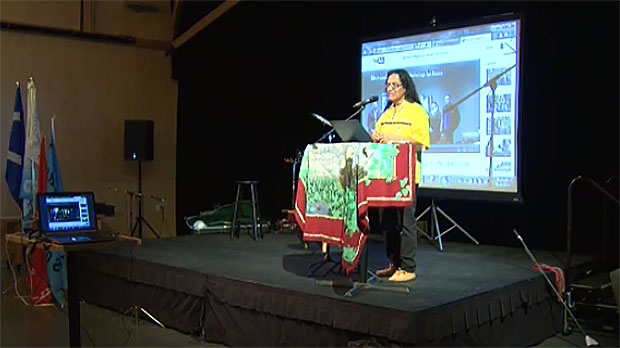 Rodney Little Mustache was a guest speaker at the event and has been living with HIV since 1994.

World Aids Day is held on December 1st each year to band people together in the fight against HIV and health care leaders are calling for continued support, as almost 35 million people remain infected worldwide.

The global health day was held for the first time in 1988 and is a reminder that there is still a need to raise money and awareness to improve education and lessen the stigmas for those diagnosed with the virus.

About 75,000 Canadians were living with HIV at the end of 2014 and according to national statistics about 9% of those were Aboriginal people.

The infection rates for aboriginal communities in Canada are higher than the national average and on Tuesday aboriginal leaders gathered in Calgary to launch Aboriginal AIDS Awareness Week.

The goal of the initiative is to connect national aboriginal organizations, government partners, health care providers and community leaders to focus on reducing the infection and death rates in their communities.

“The common challenges that we’re facing, metis, first nations, Inuit are discrimination, a lack of quality health care services to our people in isolated communities. The lack of funding where we cannot provide education and services to the people at the grassroots level," said Emma Palmantier, Canadian Aboriginal AIDS Network Chair.

Raye St. Denys is the executive director of Shining Mountain Living Community Services, an organization that provides housing primarily for aboriginal women at risk, and says the vulnerabilities from social determinants of health are higher among aboriginal populations.

“A lot of our people live in isolated or remote communities. First Nations people can’t access medical dollars to get them to treatment and get them back. Metis people cannot. So those are barriers and there’s only two clinics in Alberta, one is here in Calgary and one is in Edmonton with specialists, so if they are going for medication, for treatment, to see their specialist, they have to drive from Pincher Creek or Fort Mac or Lloydminster to the closest centre,” she said.

Rodney Little Mustache was diagnosed with HIV in June of 1994 and says people need to talk about it to end the stigma.

“The aboriginal community needs to speak up more to make it a priority,” he said. “I think it’s time for the government and everybody to just step forward and just start addressing these issues because there’s a lot of issues like funding issues, that’s one of the biggest problems right now is funding for HIV and aboriginal specific programs.”

Some aboriginal HIV and AIDS Statistics

Aboriginal AIDS Awareness Week is being accompanied by workshops across the country to continue discussions on aboriginal HIV and AIDS issues in Canada and will focus on women, youth, Inuit, and international developments.

More than 35 million people have died of HIV or AIDS since the virus was first identified over 30 years ago.

(With files from Kevin Green)