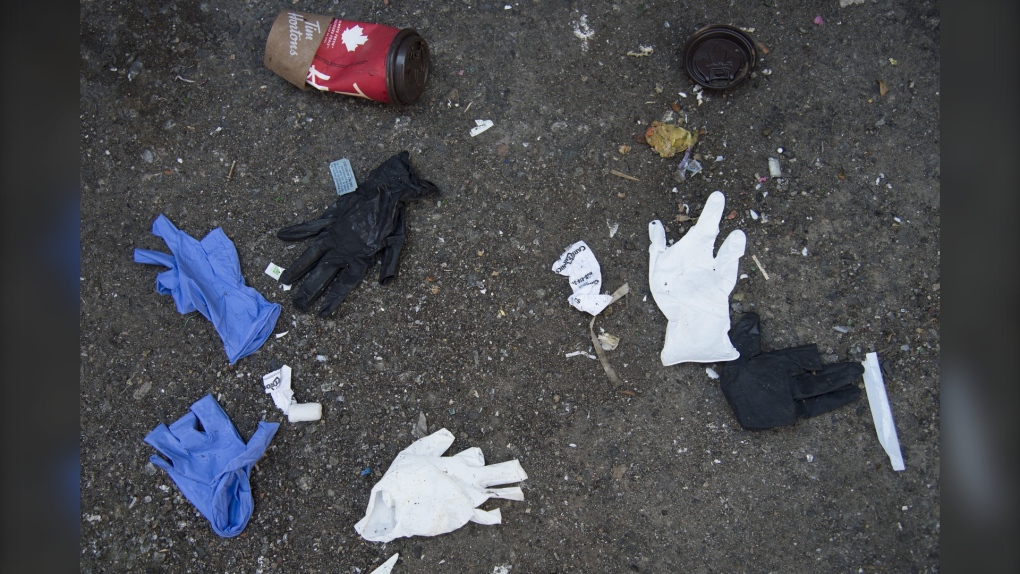 Discarded protective gloves are pictured on the street in downtown Vancouver in April 2020. The COVID-19 pandemic is introducing a new type of litterbug as people are dropping gloves and masks. (The Canadian Press/Jonathan Hayward)

CALGARY -- When Debbie Barna takes her dogs Moe and Joey for a walk, she sees gloves and masks around her apartment building.

"I've noticed on the lawn area where we take the dogs, the masks are starting to appear," she says. "It's noticeable. You get the face masks. You get the rubber gloves."

The property maintenance company Barna works for in Winnipeg and others in Canada are experiencing an increase in medical litter during the COVID-19 pandemic.

"We noticed it particularly outside of grocery stores and drug stores," says Brian Winch of Quality Maintenance in Calgary. "I have noticed more of it spreading out to other types of businesses.

"A lot of people now, when they get gas, whether it be gloves or sanitary wipes, when they fuel up ... even though there's litter containers right by the pumps, they don't go there. They just toss them on the ground."

"There has obviously been an increase in masks because people weren't wearing masks before, but I don't think it's as bad here as it is in other parts of the country," Dreger says.

"In the parking lot and the flower beds, I guess the wind blows them when people toss them," Jankowski says. "Any corner of the parking lot or in a stairwell going to an underground garage."

The company owners say their crews use gloves, pickup sticks or brooms to handle litter.

"We don't touch general garbage with our bare hands just because you never know what's there, right?" Jankowski says.

How hazardous are those blue gloves tossed aside in parking lots in terms of an infection risk to the public?

"When we look at this discarded material, whether it's gloves or masks from whatever source, (it) may carry viral material from the last wearer. I don't know how long the virus would remain active or viable on those surfaces.

"After a period of time in harsh environments, sunlight, cold or wet weather, oxidated environments will break down the virus and make it non-viable.

Sikora says that while Health Canada has deemed people wearing non-medical masks could help contain the spread of the virus, he doesn't believe wearing gloves to the grocery store will do that.

"It doesn't make sense to wear gloves in public."

Medical staff have been trained to use gloves properly, says Sikora, who adds they'll wash their hands right before putting them on and after immediately taking them off.

"You wear those gloves out in the public, you're touching door handles, you're touching various other things, you're still going to touch your face, your eyes, your mouth and your nose and run the exact same risk of contamination," he explains.

"People don't as a general rule do hand hygiene out in public before and after putting on their gloves."

'It puts others at risk'

Vancouver's director of zero waste and resource recovery says the city is experiencing medical litter in some areas.

"To date we haven't found it to be a major issue; however, we are concerned about the risk of improper disposal of gloves and masks," Albert Shamess said in a statement..

"When individuals do not take responsibility to dispose of their waste properly it puts others at risk.

"Littering personal waste (e.g. used gloves, masks, tissues, sanitary wipes) on the ground is also illegal and could result in a fine."

A City of Calgary spokesperson said in an email there has been an uptick in complaints and social media commentary about litter in parking lots and public spaces from improperly disposed gloves and masks.

The city says gloves and masks are not recyclable and should be bagged and disposed of as regular garbage.

This report by The Canadian Press was first published April 26, 2020