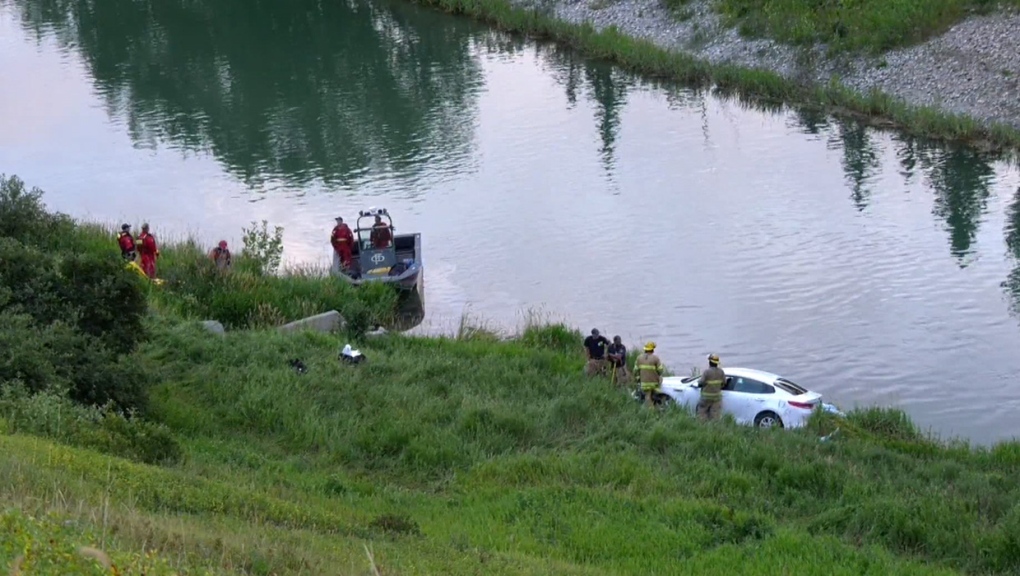 A man admiring the view of the downtown skyline leaped into action when a car barrelled past him and down an embankment towards an irrigation canal in the city's southeast.

Lay Lay Pal was taking in the sights from a parking lot near the intersection of 26th Street and 24th Avenue Southeast, near the community of Southview, when a sedan left the road and travelled roughly 30 metres down the hill overlooking Deerfoot Trail.

"We did not expect that this kind of thing could happen right in front of our eyes," said Pal. "She dropped off so fast and when we (saw) that she was going down that hill, I did not hesitate."

"My heart kicked up and I knew it was a death situation."

Pal ran down the embankment after the sedan, approached the car after it came to a stop on the bank of the irrigation canal and checked on the condition of the woman in the driver's seat.

"I went down there right away and when I seen that she was still breathing, I pulled the door and rushed her out, shut off her car and (asked) her 'Can you hear me?'," recounted Pal. "She said yes and I said come and I took her up the hill and told her to keep talking, keep talking."

According to Pal, the driver led him to believe that the crash may have been intentional.

"The decision that she made today made my heart jump. Death is not that easy," said Pal. "Thank god she is still alive and I hope she'll go home, and whatever caused this to her life, I hope she sits down and thinks about her second chance."

The woman was transported from the scene to hospital. Her condition at the time of transport has not been confirmed.

According to CFD officials, booms have been placed in the irrigation canal that runs parallel to Deerfoot Trail, at a spot south of the 17th Avenue overpass, following Wednesday evening's crash. A CFD Battalion Chief confirms to CTV that fluids from the vehicle seeped into the canal.

The canal feeds communities east of Calgary, including Strathmore, with water for crop irrigation. Alberta Environment crews responded to the scene of the crash to monitor the situation within the waterway.