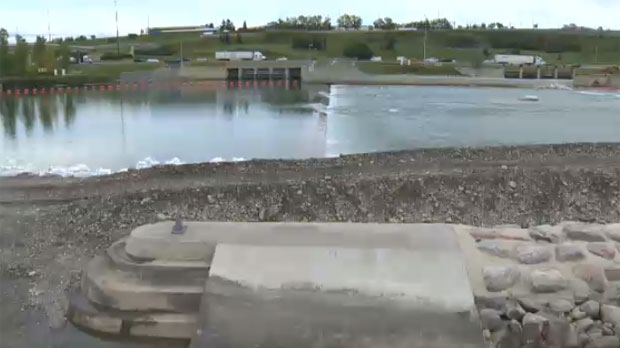 $567,000 will be spent on improvements for flood mitigation at the Harvie Passage.

The Alberta government is moving ahead with a pledge to invest $13.4M to help the City of Calgary boost flood readiness.

The money comes from the $63M earmarked in Budget 2017 for six provincial grants aimed at helping Alberta communities adapt to severe weather events.

Shannon Phillips, the Minister of Environment and Parks, says the funding is part of a larger project.

“Calgarians know from experience how quickly floods can disrupt their lives. We’re protecting people where they live and work through a 10-year, $150-million investment in flood mitigation projects in the city,” she said.

Mayor Naheed Nenshi is happy with the investment.

“Flood mitigation is our top capital priority at the City of Calgary. We must do all we can to protect our citizens and our economy. This funding from the Government of Alberta will help us immediately build additional flood resilience infrastructure on the Bow and Elbow Rivers,” he said in a release.

The funding will go towards the following areas in Calgary:

"We will always have flooding," Nenshi said. "Certainly, no matter what we do, there will be flooding. However, what we are trying to do is minimize the impact on people's lives and on the economy."

He said that Wednesday's announcements were more about communities rather than the downtown core.

"We still need continue to do upstream mitigation work on the Bow River to ensure we protect our downtown."

The province says the city will also get $522,000 through the Watershed Resiliency and Restoration Program.

That initiative funds the improvement and creation of wetlands, restoration of riparian areas, as well as education, outreach and the implementation of best management practices.

Additional funding will be provided to pay for a pilot project along the Bow River to show how riverbanks can be stabilized with willows and other native plants.