CALGARY -- At the start of the next school year in September, children who use a wheelchair at an Okotoks elementary school should be able to enjoy the playground with their friends.

Grade 5 student Ella Cutting first brought the idea of an inclusive playground to her principal at Dr. Morris Gibson School. Her classmate Cooper Oakes would be out during recess but wasn’t on the playground.

“I just feel so bad that Cooper can’t play," Cutting said, "because I think he would have so much fun and it’s heartbreaking because he can’t play.”

“The idea is we’re going to get an inclusive swing so that Dawson, Bentlee and Cooper can play,” said Ella.

Grade three student Gabbi Wildeman saw the presentation and told her parents about the idea for an inclusive playground, where she would be able to play with her classmate Bentley.

“Getting to play with my best friend in the whole wide world at the park and making her feel special and that she can do stuff like we can and she’s just like us,” said Gabbi.

“It’s not just for the school, it's for the community. This is a town facility, you come during non-school hours and you can have fun with your family and not worry about keeping someone on the sidelines,” said Wildeman.

Wildeman said an accessible merry-go-round has been ordered and should be installed this summer. The idea is to have equipment where the wheelchair can be pushed right on, instead of the need for adults to lift the child in. 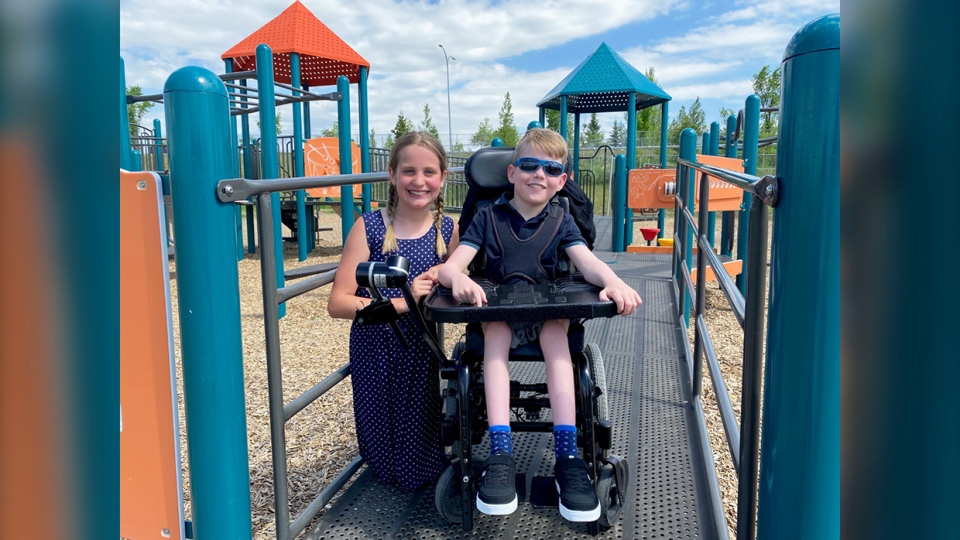 “It is designed so anybody and everybody can play and play together.”

But more money is still needed for a second piece of equipment and the changes needed so wheelchairs can move around the playground.

Parents are fundraising because the school does not receive funding from the provincial government or the school division.

The school’s principal said school council raised $100,000 for the current playground built in 2019, over four years. It also received grants and bursaries to cover the total cost of $179,000.

The cost to make the playground accessible is roughly $100,000 with two pieces of equipment.

“It will be fantastic just to see him having a good time with everybody else rather than just standing on the sidelines.”

Oakes said Ella’s initiative brought her to tears. She said inclusion is important at the school and kids with different needs are integrated with everyone else in their grade.

Oakes has also teamed up with YYC Food Trucks for an event on June 22, where trucks will park in the parking lot of the Crystal Shores Beach House. Part of the proceeds will go towards the playground. Oakes said there will be multiple food truck events through the summer.

She said this has become a community project and will benefit so many children who attend the school in the future, and her family.

“It will be fantastic just to see him having a good time with everybody else rather than just standing on the sidelines,” said Oakes.