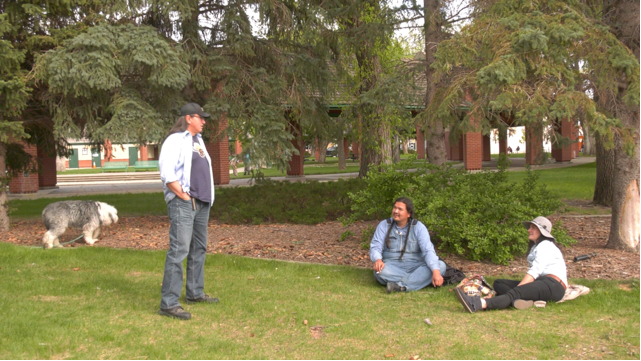 Mark Brave Rock is the founder of the Sage Clan, which specializes in helping the homeless and people suffering from addiction.

LETHBRIDGE -- The Lethbridge Police Service says it has interviewed two men, who have admitted to being involved in some fights in Galt Gardens last Friday, but no charges have been laid and their investigation continues.

However, a group that supports the homeless Indigenous population in Lethbridge is alleging that police inaction at the start of the investigation has led to racial tension in the city.

"We don’t want retaliation," said Mark Brave Rock, founder of the Sage Clan, a community patrol that specializes in helping the homeless and those suffering from addiction.

"Right now it points to the action of police that has turned this into a racial issue, and it doesn’t have to be."

Police responded to a report of a disturbance along the 300 block of Fifth Street S. shortly after 8 p.m. on Friday.

A caller reported a group of people fighting near Galt Gardens. Police arrived a few minutes later but the fight had already broken up and the parties involved had scattered throughout the park and down the streets.

Police said they immediately canvassed the area and spoke to several groups of men, but no one wanted to get involved or provide information about the incident.

Later that night several videos were posted on social media, including one showing people throwing punches.

In one video posted on Facebook, a woman said a police officer came up to her and said "you’re homeless, get out of here. Why do you hang around here?"

Over the weekend members of the Sage Clan gathered video and statements from several of the people who were involved or witnessed the incidents. They engaged lawyer Ingred Hess to turn the material over to police.

Hess said she isn’t surprised that witnesses were not willing to talk to police.

"Some of those people were a little reluctant to come forward based on historical issues with regard to incidents of racism in this city, and with regards to treatment by the Lethbridge Police Service of Indigenous members of this community."

Hess said from their statements, it was clear the officer who responded was not interested in investigating what happened.

"He is alleged to have verbally berated the members of the Indigenous community who were present in the park at that time, and showed complete lack of interest in their complaint."

Lethbridge police Insp. Jason Walper said after reviewing the file, he can say the officer did speak with several people at the scene within his vehicle, and then talked to numerous groups of people after exiting his vehicle and entering the park.

Walper said the officer then continued to search the surrounding area and spoke with some people further away from Galt Gardens.

"He again met with zero individuals willing to provide any information as far as what happened," he said.

However Brave Rock said four members of the Sage Clan patrol also responded to calls for help from two women who were at the park. He said when they arrived, the two men were still walking around intimidating people in the park.

"It’s a volatile place to be intimidating other people, and it doesn’t help that the officer that attended instead went after the homeless people and addicted people, and pushed it aside as a drunken dispute," he said.

Brave Rock said about 11 people, including several women, received a variety of injuries from incidents.

Hess said those injuries included fat lips, blows to the head and people being knocked to the ground.

Walper said police did not receive any further calls concerning ongoing fights or incidents that evening.

Police said a follow up investigation on May 16 revealed two men associated with a black truck were identified, located and provided statements. Walper said the men admitted to being involved in a fight and they had consumed alcohol.

"We have no indication to believe this was a hate crime. Certainly it was a verbal confirmation turned physical."

He said police are still gathering video evidence from local businesses and are interested in getting eye witness accounts from anyone with first-hand knowledge of the incidents.

"We understand there’s a lot of frustration over the videos that were posted, but there’s a much bigger picture here and we are only catching snippets of that," he said.

Brave Rock said the Sage Clan doesn’t want to see this incident result in any form of retaliation. He said all they’re asking for is a thorough and complete police investigation.