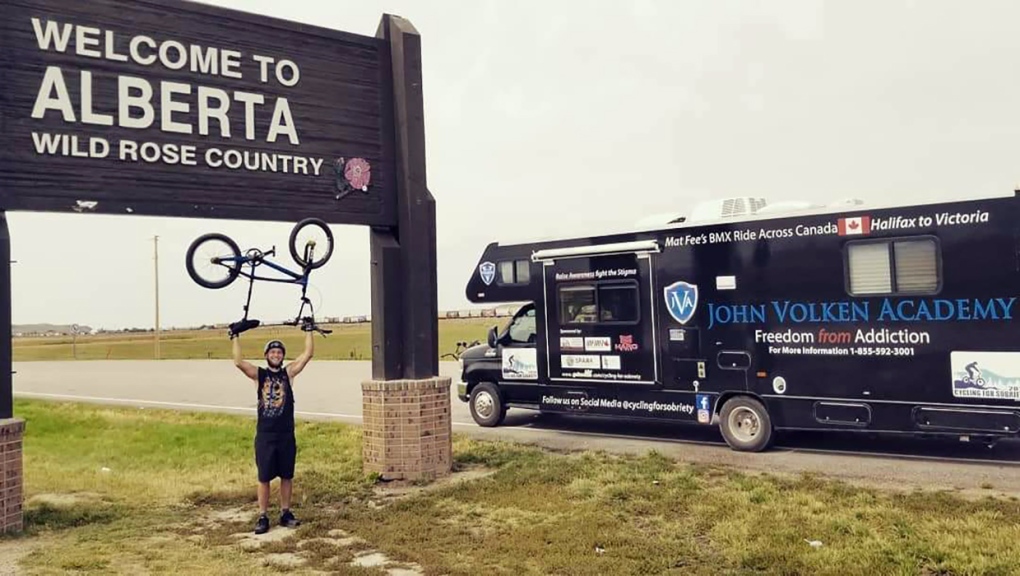 Mat Fee rolled into Calgary on his BMX bike on September 7th and is resting up before continuing his journey to the west coast.

A Canadian man is riding his BMX bike from coast-to-coast to raise awareness about drug addiction treatment and hopes to set a world record while he's at it.

Mat Fee rolled into Calgary on his BMX bike on September 7th after spending the last four months making his way here from Halifax, NS.

Fee is currently undertaking a record breaking feat, riding his single gear BMX bicycle across the country all in celebration of his recent graduation from the John Volken Academy, a therapeutic community recovery centre.

The goal is to ride from coast-to-coast over approximately 143 days, totalling over 6,200 kilometres.

Fee is on a rest and recovery day in Calgary, tuning his bike for the roads ahead.

He tells CTV News that he first pondered the idea of the cross-country-trek when he was just seven years old.

“My life got pretty rough, I fell into addiction and lived that way for a long time.”

After seven failed attempts at other treatment centres, Fee found the John Volken Academy.  “It’s a different type of treatment centre, exactly what I needed at that time. I was able to break free from addiction and that’s when the idea came back to me.”

He pitched the trip to John Volken, founder of the recovery centre, and the dream became a reality.

Fee's BMX bike has seen him though thousands of kilometres of Canadian highways at this point. He says he’s worn through about 25 tires, countless tubes and has faced a lot of ups and downs.

He says his ultimate goal is to inspire others. “I just want to encourage everyone that recovery’s possible, it's possible to break free from addiction and really just do something amazing with your life afterwards.”

You can follow along as Mat continues his way home through B.C. by checking his website cyclingforsobriety.org