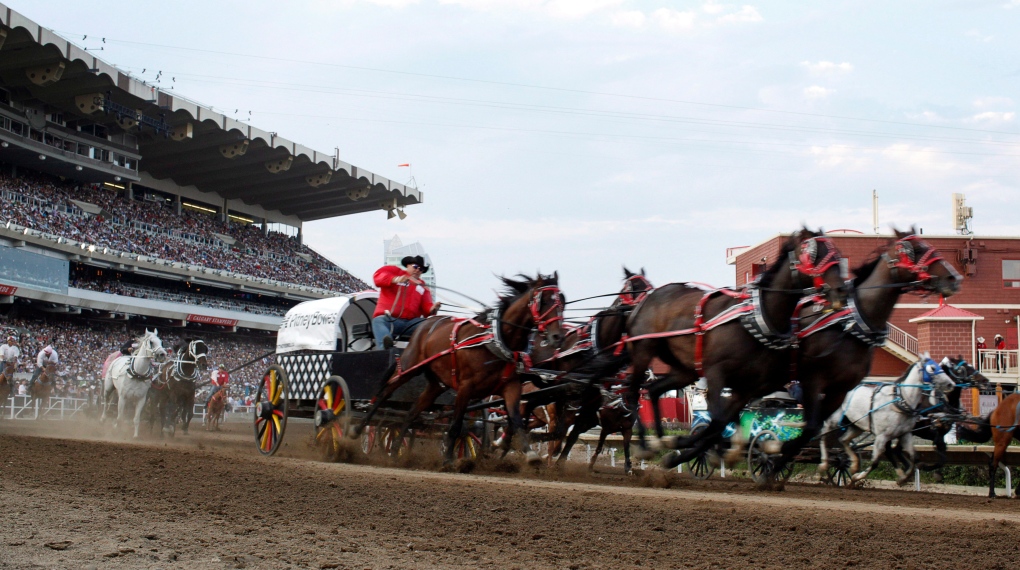 The Rangeland Derby at the Calgary Stampede. (File: THE CANADIAN PRESS/Jeff McIntosh)
CALGARY -

Chuckwagon drivers will descend on High River, Alta. for two weekends in July for a tournament created following the cancellation of this year's Calgary Stampede Rangeland Derby.

The World Professional Chuckwagon Association (WPCA) has announced the 2021 Battle of the Foothills will be held at the High River Agricultural Society Grounds on July 16-18 and July 23-25.

The announcement is welcome news for a chuckwagon racing community that has struggled to survive. The COVID-19 pandemic has prompted the cancellation of the majority of the racing calendar over the last year-and-a-half.

More than $150,000 in prize money will be up for grabs in High River, but organizers anticipate the pot will grow as there's been an outpouring of offerings of support from the public and corporate sponsors.

Details regarding the size of the field have not been confirmed but the WPCA says the top eight drivers after the first four days of racing will advance and compete in the final two heats of Saturday's semi-finals. The drivers with the four fastest times from those heats will advance to Sunday's championship race.

Every heat on championship Sunday will be a 'dash for cash' with drivers competing for additional prize money.

In late May, the Calgary Stampede announced its preliminary plans for the 2021 edition of the Greatest Outdoor Show on Earth but the Rangeland Derby was noticeable in its absence.

Stampede officials said the decision to eliminate chuckwagon racing from this year's event was due to concerns regarding animal welfare — a move supported by the Calgary Humane Society — as a direct result of the lack of a racing season ahead of the Stampede. Several drivers took offence with the claims that they would jeopardize the safety of their horses.

Coolio, the '90s rapper who lit up the music charts with hits like 'Gangsta's Paradise' and 'Fantastic Voyage,' has died, his friend and manager Jarez Posey, told CNN. He was 59.