HIGH RIVER – The sky above the Town of High River will be filled with a massive fleet of hot air balloons as part of a festival that's expected to draw thousands of people to the southern Alberta community.

The Heritage International Balloon Festival began in 2013 as a way to help High River residents recover from the devastating flood that year.

"Basically just to lift the spirits of the community," says festival chair Jamie Kinghorn. "We had some balloons come in from the States and overseas, and they loved it so much, the way they were treated in the area, and the community loved it so we just made it into an annual event."

The festival, now in its seventh year, has grown to become a major tourist event for the community south of Calgary, drawing up to 30,000 people over the five days.

"For High River, it’s just a huge economic boost to the community. There’s lots of money that comes into town," says Kinghorn. "The energy and spirit around the entire town is amazing when the balloons are here."

The High River festival attracts balloon pilots from all around the world. 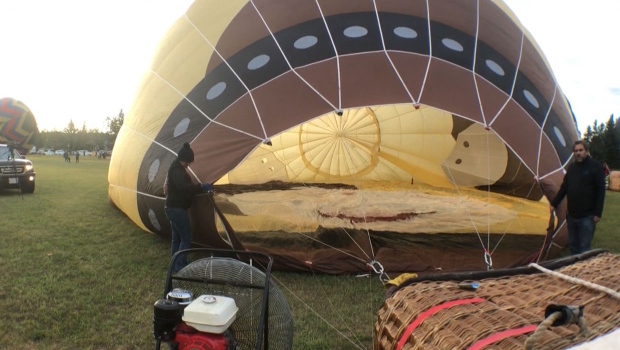 Paul Burrows, from Bristol, England, is one of them. The 27-year-veteran flyer brought two balloons to this year’s event and both of them are 'character' balloons.

One is named Busby, in the shape of a Queen’s guard. The other is a dog-shaped balloon named "Buster."

Burrows has flown in the southern U.S., the Philippines and Southeast Asia, but says Alberta’s cool fall climate offers advantages to balloon pilots.

"Cool stable air gives lovely flying conditions," he says. "You get lovely, lovely views. We rely on being hotter than the air around us so, the colder the air, the easier it is for us to fly."

While the festival officially kicks off with a mass launch Wednesday evening, many lucky High River residents got a sneak peek early in the morning.

Several of the balloons launched at daybreak and the event was well attended despite being unadvertised.

Kim Matheson brought her children to watch the balloons inflate and fly off.

"It’s just something you never see anywhere else," she says. "It’s just magical."

The signature event of the five-day festival is Friday evening’s "Night Glow" in which all the balloons inflate and rise only a few metres off the ground, suspended like giant lanterns, allowing festival goers to wander amongst them.

Attendees can also book balloon rides, walk around the inflating balloons and talk with pilots and crew.

Many of the events are weather dependent, so it is advised to check in advance before heading to the festival.

Further information about The Heritage Inn International Ballon Festival can be found on its official website.

For automobile enthusiasts taking a break from the balloons, The River City Classics Show and Shine, runs Sunday in conjunction with the balloon festival.