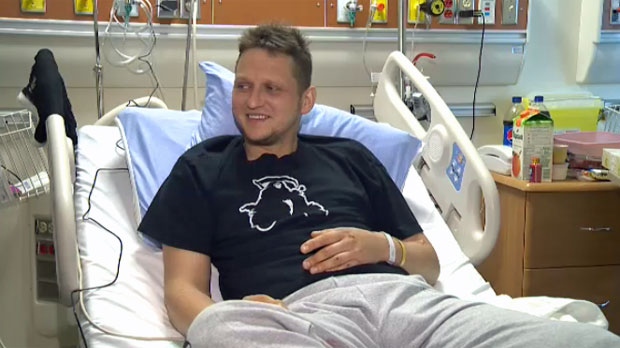 A victim impact statement was read on behalf of Piotr Glowacki, who was seriously injured in a hit-and-run crash.

A Polish man left disabled following a 2017 hit-and-run on the Trans Canada Highway says it feels like he is living in a prison after losing his independence.

A friend of Piotr Glowacki read a victim impact statement on his behalf Monday at a sentencing hearing for the Airdrie man who admitted he drove off after the May 14, 2017 crash.

Glowaki was left lying on the road, bleeding, with a visibly broken leg.

He has gone through five surgeries and still requires two more.

“After each surgery I experience a terrible pain for about a month and as a result I am addicted to painkillers now. It’s been about two years since the accident and I am still disabled,” Glowacki wrote in his victim impact statement.

Glowaki was in the midst of a trip around the world, where he was a hoping to set a record travelling on a 50cc scooter when he was hit.

“It’s ruined his life, he can’t work anymore, he had to have his leg shortened by three centimeters, it’s been completely devastating to him,” said Gary Fisher outside the Calgary Courts Centre.

Fisher met Glowaki when he reached out to the Apocalypse Scooter Club during his time in Calgary.

Fisher said he wanted to be the voice for Glowaki in court Monday, since he couldn’t be there in person to represent himself.

Ferguson also pleaded guilty to armed robbery and attempted robbery, for two violent liquor store break-and-enters in Cochrane in May 2017.

“The impact it’s had on people is forever and I don’t think Mr. Ferguson realizes that,” said Crown prosecutor Doug Simpson.

“The acts of this man are what I would call callous, violent.”

Simpson is suggesting an appropriate sentence of just under 10 years, which includes 21 months for the dangerous driving offences.

But defence lawyer Andrea Urquhart argued a global sentence in the range of four years is more appropriate, with 12 months for the hit-and-run.

“I would like to express my apologies to the people I have victimized,” said Ferguson.

He told the judge he wished they were in court to hear him.

According to Alberta Justice, the court recommended Ferguson be favourably considered for participation in a residential treatment program either while in the facility or as a condition of his parole.