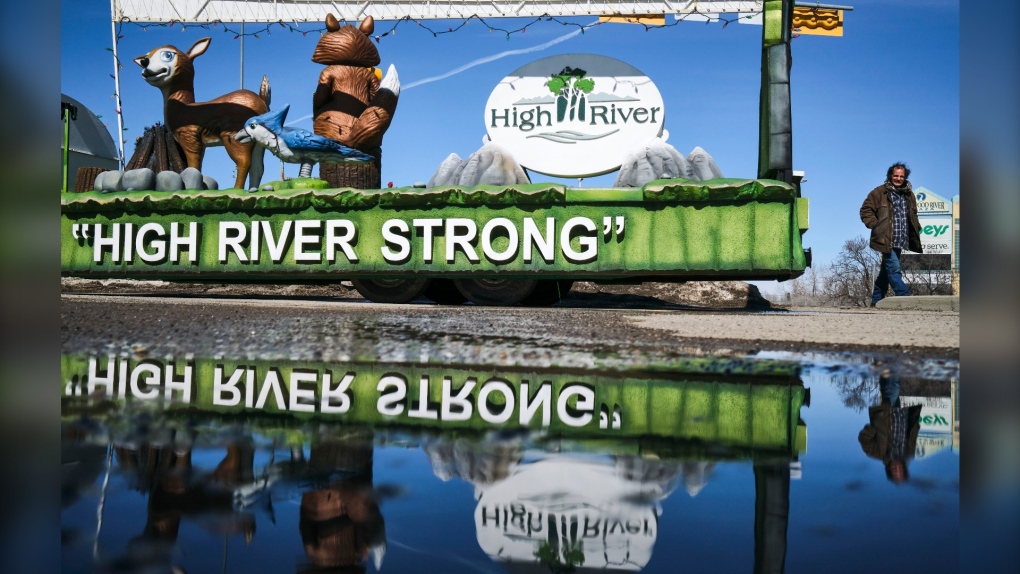 HIGH RIVER, ALTA. -- A parade float parked on a downtown street in High River, Alta., seems strangely out of place in a world dealing with the COVID-19 pandemic.

But longtime Mayor Craig Snodgrass says with people forced to stay away from family and friends, the town was asked to bring out the float as a way to boost morale.

The community of 13,000 has been through calamity before. In June 2013, entire neighbourhoods in the town were under water for weeks as extensive flooding swept across southern Alberta.

That's why the message on the float reads: "High River Strong."

"That came from the flood, of course, and that's kind of paying tribute to the chaos we've been through before and not just to the chaos. Everybody knows how well we're doing coming out of that flood," Snodgrass said.

"That took a long time, but we did that one, and we will take this one on, too."

But while the flood forced everyone in High River out of their homes in 2013, the COVID-19 pandemic is forcing everyone inside.

"We've got some experience, but this is still a kick," said Snodgrass. "A lot of these guys were just getting back into a comfortable state of business and now here we are again.

The rebuilding of High River after the flood took four years to complete.

"Cinema closed until real life doesn't feel like a movie," it reads.

Chantelle Sapinsky, who owns The Barber Shop, said business had tapered off to nearly nothing before the Alberta government ordered closed all non-essential businesses, such as hers.

"It's a little bit nerve-wracking at the moment when there's no money coming in," she said.

"The town isn't destroyed per se, but what's going to happen to all of these small businesses? Hopefully I'll survive. I guess what's the worst thing you do? Start again?"

Snodgrass said that most of the businesses that made it through the flood know how to persevere.

"But there's always going to be those businesses that won't survive this whether it's two, three or four months."

Resident Henry Wipf was laid off from his job in the oil and gas industry a couple of weeks ago.

"This is maybe a little bit more overwhelming because the kids are home," he said. "It's a little much, I would say, but it too will pass."

Snodgrass said he's worried about the mental-health toll the outbreak will take on his community.

"When the flood happened, you had a lot of things to keep your mind occupied for quite a while - rebuilding your house, business and the community. For years there was just stuff to do constantly.

"Now with this thing, it's basically go home and sit down, and that really starts to take its toll on your mind. You're constantly looking for new information and hoping to see something that says it's gone, it's done and it's over.

"And that's not happening for a while."