Horse put down after fracturing leg at Rangeland Derby 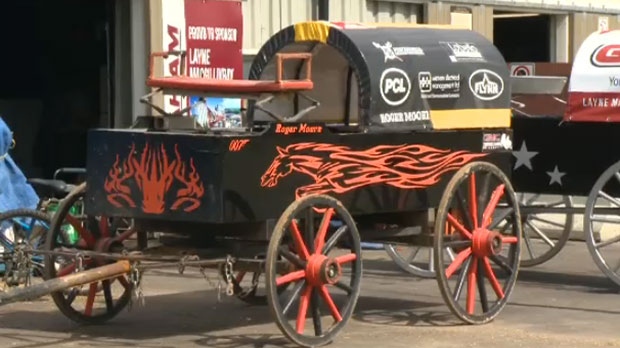 One of Roger Moore's horses had to be put down after it was injured after a chuckwagon race at the Stampede on Sunday, July 9, 2017.

A chuckwagon horse was euthanized by a veterinarian after it was injured following the fifth heat of the Rangeland Derby on Sunday evening.

The horse, named Cowboy, was part of Roger Moore’s rig and was immediately assessed after it sustained an injury just after the race wrapped up.

“It was a big loss for me last night because any time you can lose one of those it’s like, for me basically, losing a family member. I’m close to these horses and spend more time with them than I do with my own family,” said Moore.

A veterinarian discovered that the horse had a severe fracture of the cannon bone on the left hind leg and a decision was made to euthanize the animal.

“He’s a horse that was, basically, his running life was done on the race track and this was his second chance and he was doing a hell of a job at it too,” said Moore. “He’s one of them special ones, kids loved him and everybody loved him, he was just so friendly and so it’s a big loss.”

“We do our best to prevent all injuries. Nobody ever wants to lose an animal anywhere on Stampede Park, that’s obviously not our goal. I’d love to prevent everything, it’s no different than a football player sustaining a concussion who’s wearing a helmet. I don’t want to glean over it, it’s a very sensitive issue for the driver and their family, it’s like a family member to them as well,” said Mike Piper, Chuckwagon Committee Chair.

Stampede officials say the horse did not get tangled and that there was no collision on the track. They say this type of fracture is common to thoroughbreds in the racing industry.

The Vancouver Humane Society has been very vocal about chuckwagon events in the past and is calling on the Stampede to suspend racing.

“Nearly every year horses die in this race, which clearly puts them at undue risk of injury and death,” said VHS spokesman Peter Fricker in a statement to CTV News.  “The Stampede has failed to stop horses dying and the public should let them know this is unacceptable.”

VHS officials say over 60 chuckwagon horses have died at the Calgary Stampede since 1986 and they want to see an independent panel established to review the event to see if it can be made safer.