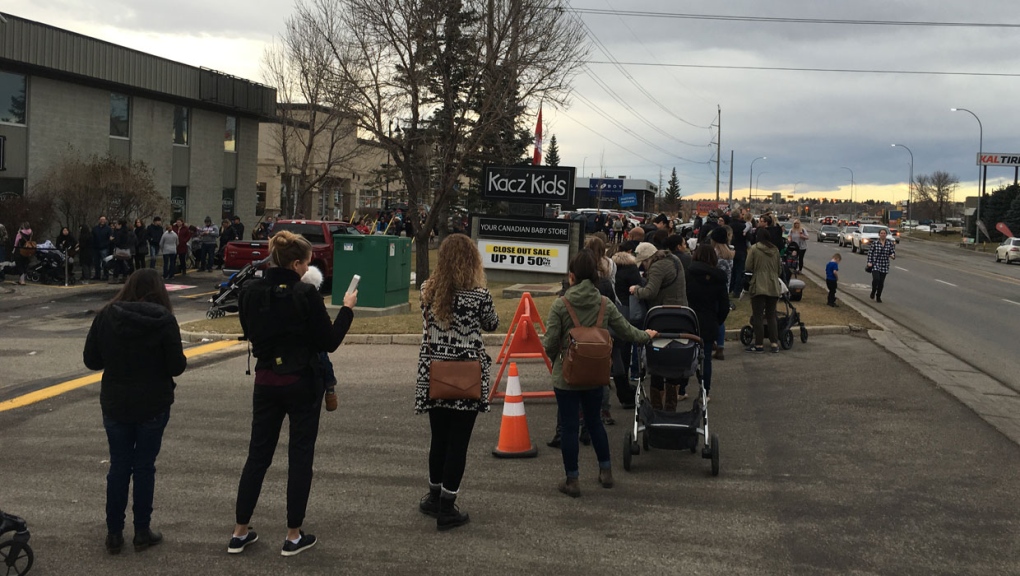 Dedicated customers waited for as long as six hours to take advantage of a big closing sale at Kacz' Kids in southeast Calgary.

CALGARY – It's the beginning of the end for a concept at a popular children's and baby apparel store in southeast Calgary.

Hundreds of people lined up outside Kacz' Kids, on 11 Street S.E. on Friday morning, with the lineup winding all the way around the parking lot and down the street.

"It's like a mom n' pop shop and I would rather buy stuff locally than on Amazon, so it's kind of sad for me," one woman said.

The company, which has done business in Calgary for the past 35 years, announced earlier this week it would be closing its flagship store and moving to a different concept.

"With the cost of doing business, with taxes, with the cost of freight, it's really tricky to keep a business of this square footage alive," said Nicole Townsend, spokesperson for Kacz' Kids.

She says the building is the only thing that's closing down and they are taking steps to keep the family business running.

"We are going to have to reduce our footprint in order to do that."

The store in Deerfoot Meadows was the original store that the Kaczmarek family opened in the city and owners say it will stay open until they've liquidated all the merchandise.

In the new year, they expect to move into a new concept of a space, focusing on more specialized categories.

For the first day of the sale, some customers said they had to wait up to six hours to get into the store and find some deals.