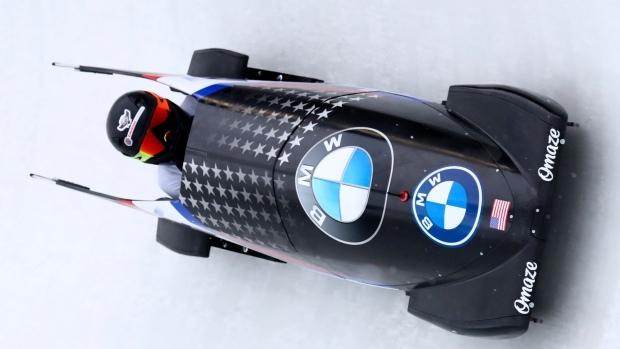 Humphries, a Calgary native, has four medals, all of them gold, including the world-title win. (The Canadian Press)

CALGARY -- Kaillie Humphries is headed into the final day of the major international sliding season with a chance at another world championship.

The final two runs are Sunday.

“We've only had so many runs on this track, and we didn't get our monobob sleds until January,” Humphries said. “We're still learning, and on one of the most technically challenging tracks in the world.”

Humphries won her record fourth women's bobsled championship last weekend, teaming with Lolo Jones for that title. Monobob, as the name suggests, is run with just a driver in the sled and is a relatively new discipline that will be in the Olympics for the first time next year. Humphries competed in two monobob races this season, winning both.

Humphries, who began racing for the U.S. two years ago after getting her release from her native Canada's national team, is the only non-German in the top five at the midway mark. Mariama Jamanka is fourth in 2:01.01 and Kim Kalicki fifth in 2:01.08.

“To be amongst the Germans is a good place to be,” Humphries said.

Elana Meyers Taylor, the other American in the women's monobob field at worlds, crashed in her first run Saturday and is well out of medal contention. She's 19th through two runs.

The U.S. has won 17 medals in major international sliding races this season - all by women. Nicole Vogt won four golds and a silver in monobob races at Park City, Utah and Lake Placid, New York, fields that had some veteran drivers but without the top pilots from the World Cup circuit this season since they were all in Europe.

Humphries, a Calgary native, has four medals, all of them gold, including the world-title win. Jones won two golds, one in a World Cup race with Humphries and the other in the world championships last weekend.

Meyers Taylor medaled five times, four silvers and a bronze. Sylvia Hoffman was a two-time medallist on World Cup for the U.S. Lake Kwaza, Riley Compton and Brittany Reinbolt each medaled once for USA Bobsled, and Summer Britcher won a World Cup bronze this season for USA Luge.

And now Humphries has a chance to end this most unusual season - where U.S. teams skipped the first half because of concerns about the pandemic and international travel - with one more win. There are team trials races for next season coming up before winter ends in the U.S., but Sunday marks the end of the major international racing slate for the Americans.

“After all of my years of experience, I know that it's not over until it's over,” Humphries said. “Anything can happen. A lot can be won or lost in one run, and there's still a lot of racing to do.”