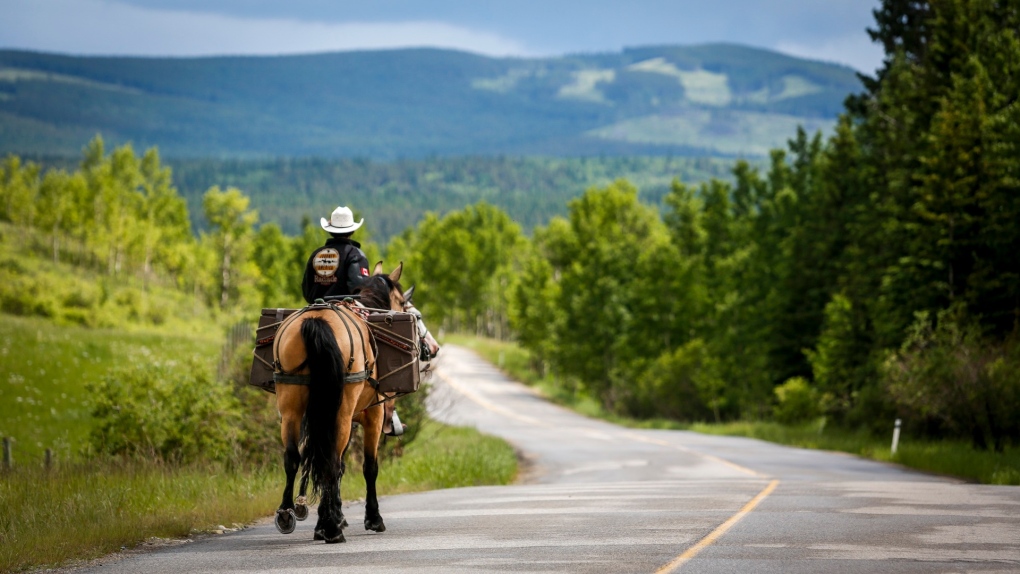 Felipe Masetti, a Brazilian cowboy who has been riding from Alaska to Calgary and who has also been chosen as the parade marshal for the Calgary Stampede, rides his pony Smokey as pack pony Mack follows along near Waiparous Village, Alta. (Jeff McIntosh/The Canadian Press)

WAIPAROUS VILLAGE -- Filipe Masetti Leite stops for a break from another long day in the saddle on his year-long trek encountering bugs, bears, buffalo and bad weather.

The Brazilian cowboy, 33, who grew up in Canada and wants to become a Canadian citizen, is to finish his 3,400-kilometre journey by horse from Alaska to Calgary on Friday. The 2020 Calgary Stampede, set to start the same day, was cancelled due to COVID-19.

Despite the cancellation, Masetti Leite was named the event's official parade marshal. He is to be greeted by an escort of Stampede officials and Mounties on horseback, who will then ride with him to a small ceremony at the city's Stampede grounds.

“I'm sad to say goodbye to my ponies, but other than that I'm looking forward to getting to Calgary and having a beer,” Masetti Leite says with a laugh while stopped this week on a desolate road mostly used by campers and logging trucks about 120 kilometres northwest of Calgary.

Light rain drips from the brim of his white cowboy hat as dark clouds move overhead.

Masetti Leite says he has avoided travelling on major highways since he set out from Anchorage in May 2019, switching between his two horses named Smoky and Mack.

It's not his first journey as a long rider, a term used for an equestrian who has gone more than 1,600 continuous kilometres in a single journey.

Masetti Leite, who moved with his family to Calgary when he was nine, later grew up in Toronto. He says he was inspired to become a long rider by Aime Tschiffely, a Swiss school teacher who rode 16,000 kilometres alone from Buenos Aires to New York City in 1925 and wrote about his experiences.

Masetti Leite has also documented his travels and written the book Long Ride Home: Guts and Guns and Grizzlies, 800 Days Through the Americas in a Saddle.

Proudly sporting a Canadian flag on the right arm of his black bomber jacket, Masetti Leite says most people don't realize he isn't a Canadian citizen. He says his family applied years ago for citizenship for humanitarian reasons but were denied.

“It's the hardest part of my life,” he says, wiping away tears. “It was like a punch to the gut.”

He says he feels Canadian.

“I love this country so much. I've been a man without a country for years sir. It's a total identity crisis.”

Masetti Leite says this long ride into Calgary will be his last.

“I started doing this because I didn't want to do the mundane and now this has become mundane,” he says.

“I crossed a grizzly bear the other day and I wasn't even scared. And you know what? I've got to call it quits. This is not normal.”

This report by The Canadian Press was first published July 1, 2020