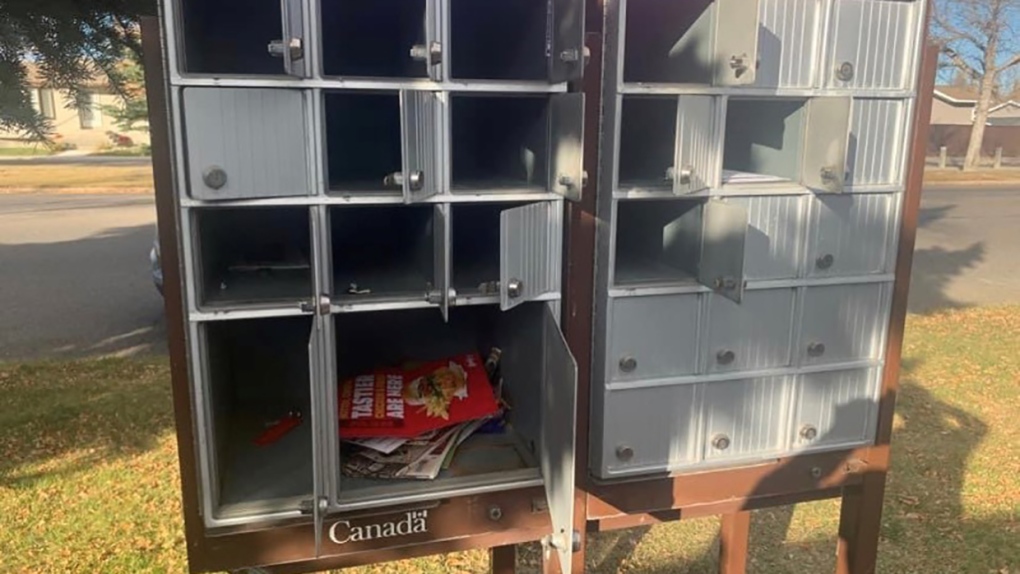 Approximately eight mailboxes have been targeted, including Clark’s whose mailbox was broken into not once, but twice.
LETHBRIDGE, Alta. -

Residents living in the Uplands neighbourhood are growing more concerned after multiple community mailboxes were broken into over the past month. The most recent break-in of three mailboxes happened on Friday.

“With these mailboxes, it has everybody a little bit uneasy because who knows what there after, right? It could be someone’s identity or if it’s just parcels,” said Brittany Clark, who lives in the Uplands.

Approximately eight mailboxes have been targeted, including Clark’s whose mailbox was broken into not once, but twice.

“I know a lot of my neighbours are trying to get boxes in facilities like Shoppers Drug Mart,” Clark said.

In 2020, Canada Post delivered just under 20 million parcels during the two weeks leading up to Christmas.

Clark reached out to Canada Post regarding the break-ins and was told that her community isn’t the only one that has been hit in Lethbridge.

“Canada Post was saying that there were other neighbourhoods in Lethbridge so that’s sad that this is happening to people,” said Clark.

The Lethbridge Police Service confirmed to CTV News that officers did respond to a call about suspicious activity around some mailboxes in the Cougar Road area Friday.

A resident who didn’t want to be on camera told CTV News that the mailbox located at the corner of Erminedale Blvd and Erminedale Bay was broken into sometime between 4 p.m. and 7 p.m. on Friday.

The RCMP is reminding residents of mail safety tips as we head into the holiday season. Some of those include: having parcels delivered to an alternate pickup location if you aren’t home; ensure packages and parcels have a tracking number; and install video cameras to deter thieves from taking your mail.

As for Clark, she says there isn’t much more she can do.

“I’m just checking my mail every day now," she said. "Every evening, we just check out mail and hope that it doesn’t get compromised or stolen,” added Clark.

If you experience a mailbox that has been broken into, you’re asked to call the police.

The proportion of Canadians who predominantly speak French at home declined in all provinces and territories except Yukon between 2016 and 2021, according to the latest census release.

A large fire that broke out in a railway arch in Southwark, central London, on Wednesday morning was under control by midday, the London Fire Brigade (LFB) said.