The brother of Filipino vice-president Leni Robredo who currently resides in Calgary is speaking out after his sister lost the country’s federal election in a landslide to the son of a former dictator.

Antonio Gerona moved to Calgary from the Philippines nine years ago, but the pride he has for his home country never left.

"The results came in far too fast and I don’t believe the election was conducted fairly, there was a lot of fake news about my sister in disinformation campaigns as well."

With 98 per cent of the votes counted on Wednesday, Ferdinand Marcos Jr. received 31 million votes compared to Robredo’s 14 million according to unofficial results.

Marcos Jr., known by his popular nickname ‘Bongbong’ is the son and namesake of the late dictator. It’s believed much of his success came from a massive disinformation campaign targeting his opponent, while trying to rewrite his family’s disgraced history.

The Marcos Sr. regime lasted more than 20 years and ended in 1986 resulting in human rights violations and citizens who lived under martial law. It ended following the family’s humiliating retreat into exile during a ‘people power uprising.’

Following his victory, Marcos Jr. has asked the world not to judge him by his family’s past, with his office releasing a statement saying he will be a ‘President for all Filipinos.’

Marichu Antonio was one of the past Filipino citizens who spoke against the Marcos Sr. government, launching several protests against the dictator during her time as a university student.

Antonio, who has lived in Calgary for 27 years and was named the city’s 2020 ‘Citizen of the Year’ recalled being imprisoned from 1984 to 1985, tortured, and separated from her young daughter and son without any formal charges laid against her. 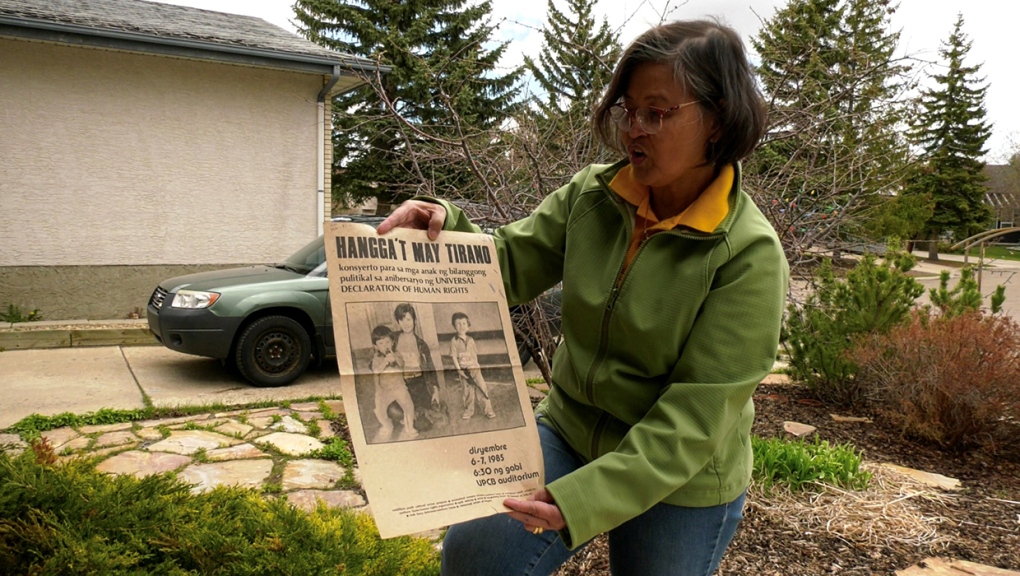 Marichu Antonio was one of the past Filipino citizens who spoke against the Marcos Sr. government, launching several protests against the dictator during her time as a university student.

"I was arrested, handcuffed to a house where there were so many men, and I was stripped down naked, I was abused, hit in the face and I was gagged with used socks as I was screaming loud for help," Antonio said.

"I was involved in many protests, I had friends who disappeared and until now their bodies could not be found because they protested against the human rights violations."

Antonio has since won a class-action lawsuit in 2014 against the Marcos Sr. government and is continuing to receive compensation, but she hopes to continue to expose the truth to people around the world.

"Marcos Jr. is not denying what happened to me in the past," she said.

"I am pretty furious about what happened and I will not stop fighting to tell the truth and fight this revising of history in our fight for justice."

According to the Consulate General of the Philippines, voter turnout in Calgary for the 2022 Filipino presidential election has increased by 50 per cent compared to the last 2016 election.

Consul Gen. Zaldy Patron said his team was able to mail in 5,350 ballots from registered voters in the Calgary area which translated to a 33.17 per cent voter turnout.

He said his team was kept extremely busy during the 13 day voting period with volunteers counting ballots from 9 a.m. Monday to 2 a.m. Tuesday.

"This is a healthy sign of democracy as far as we are concerned, many are interested to vote and have a say on the outcome of these national elections and that speaks for all groups supporting various parties in the Philippines," said Patron.

"We’re also noticing a younger generation of voters because many in the Philippines now have cell phones where they can check what's going on in the country in the neighborhood, so many of them came out."

Michael Juarez, who is the director of communications for the Philippine Festival Council of Alberta said this election in particular has had a great deal of traction across the province.

"You have voters from both sides who bring up very good points and even within the Filipino community we’re having conversations and we’ve seen some division with friendships, relationships, even within families,"Juarez said.

"But at the same time we've got a hope that the Philippine people have smartened up since they've made their choice. Marcos Jr. gets inaugurated in June so let's see what he does."