'I've got my control back': Robot allows grade 12 student to return to class

CALGARY -- For the first time in four years, Cody Kirk moved through his Notre Dame classroom chatting with his teacher and his friends.

“It gives me a better sense of learning. And it's also really cool that I can actually see the person (in front of me)," said Kirk   ”It means I can see, my friends, the group I'm working with”.

Kirk has Gaucher disease, which causes internal organs to swell, and bones to weaken.  It’s kept the grade 12 student out of the classroom since he was in the eighth grade.

In the spring  Matthew Toms-Zuberec, one of his friends in the school’s pre-engineering program, made it his class project to build a robot to allow Cody to interact more freely with his class.

“We tossed around the idea of getting him a robot or something that he could drive around the class” said Toms-Zuberec, “so he could still participate and have the social interaction he  had lost.”

When COVID-19 caused classes to be cancelled in the spring the project ended, but Toms-Zuberec’s desire to see his friend have an in-class experience did not.

“He never actually got the opportunity to drive it around. And since then, while we were in lockdown, I took it upon myself to just kind of wonder like, how can I still finish this” said Toms-Zuberec “I felt awful for him. I started building this robot and gave him this chance or the shot to come back into the class only for it to be kind of knocked down.” 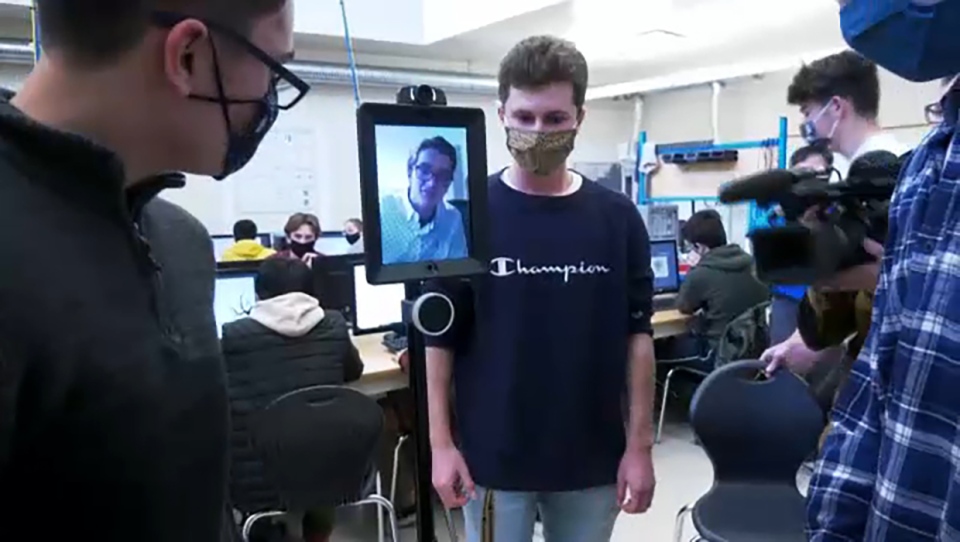 Toms-Zuberec contacted  Calgary tech firm Z3 Network Solutions  which markets a telepresence robot  called the Double 2.  The company reviewed the work that the students had already completed in trying to build a robot, and decided they, along with supplier Konica-Minolta would donate one to Cody .

“We took a look at what he (Toms-Zuberec) had already done and  were fascinated by it.” Said Z3 Network President  Darryl Graham.  “We wanted to bring Cody down to the office so we could have a look at this. We knew we want to work with him and see if we could get some way of putting the Double 2 robot in the school for him to use.”

The robot looks like a Segway with a tablet attached at its top. Kirk is able to control it from his home computer. With the tablet at eye level, he can move through the class, turning from side to side to see the person he is talking to  while carrying  on video chats with people around him.

“The kids involved him in everything that we did, and he interacted with students, but without autonomy,” said pre-engineering instructor Michael MacDonald,  “Now having this robot allows him to be able to be whoever who he wants to be and do whatever he wants to do.  For the classroom, it means that he gets to interact with a lot more different projects over the course of a day.”

Wednesday morning, for the first time ever, Kirk was able travel through the halls of the school, and look into other classrooms like the welding shop.  Even though it is a remote connection, the sense of being able to travel where he wants, and cruise the halls with his friends is exhilirating for Kirk.

“I’ve got my control back” said Kirk. “I can visit anyone really - that’s awesome.”

“This honestly, it's overwhelming.  I'm just super happy he's been given the chance now to be able to come back in into school.” said Toms-Zuberec.  “He's given control over how he socializes with people because before, we just passed him around (on a laptop computer)  in the class and he wasn't able to really explore the school or do what he wanted to. And it was quite a blessing.”

MacDonald says what started as an engineering project for his students turned into a life lesson.

“One of the things that the students got out of this was that they learned about the power of inclusion," said MacDonald “The problem solving-based class that we have teaches them something about pre-engineering.

"Having Cody in this class with them," McDonald added,  "taught them something about life.”