'I want more people to talk about this issue': Lethbridge author chronicles life with bipolar disorder 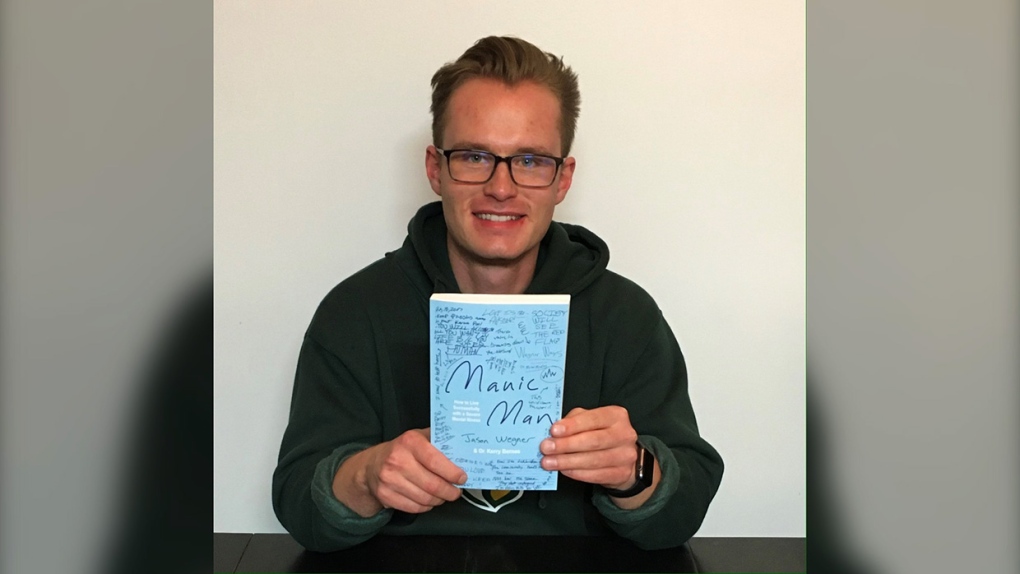 Since being diagnosed with bipolar I disorder four years ago, Jason Wegner has now released an honest memoir that explores his perspective of living with a sever mental illness.
LETHBRIDGE, Alta. -

Jason Wegner, 24, hopes that by telling his story honestly, he will inspire hope for those currently facing mental health challenges.

His new book 'Manic Man: How to Live Successfully with a Severe Mental Illness' hit book store shelves last week, and it's been selling consistently.

The book looks at Wegner's life before his manic episode in what is referred to as the hypomanic stage where a person with bipolar I disorder has lots of energy and doesn't need much sleep, and it later explores his life managing the severe disorder.

On July 1st, 2017, Wegner and a few friends tried the psychedelic drug LSD, which he believes was one of the primary triggers of a severe manic episode.

"A few weeks later, I ended up in Africa helping build a school with a foundation in Canada and while I was there, it was very chaotic," he said.

"One night I even snuck in a mickey of vodka and drank it. It was just very uncharacteristic of me. I'm usually a rule bender, but definitely not a rule breaker."

When he came back to Canada, Wegner said his parents knew immediately that something was wrong.

On the ride back to Lethbridge, he was talking non-stop with a frantic and scattered pace.

Two days after returning home, he moved out of his parents' house where he had been staying while studying at the University of Lethbridge to become an English teacher.

"Once I moved out, I was living in squalor. I wasn't eating, I lost both of my jobs for poor behaviour that was characterized by my manic state, and I was journaling all the time," said Wegner.

"The output in a manic state is just unbelievable. I have hundreds of pages of notes."

He said he remembers feeling like he was on super-human levels of intelligence and performance, and when his parents asked him to see a doctor, he reluctantly went to the hospital.

"Within five minutes the doctor knew that I was bipolar I and in a manic state," Wegner said.

"He came back into the room with two blue pills that I immediately refused, because I didn't want to lose my 'super powers', and he reassured my parents that I would be spending at least the next 30 days in the acute psychiatry ward."

Wegner spent 57 days in the hospital in order to come down from the mania. What followed was seven months of depression.

"After the depression, about a year later I finally got my life back," said Wegner.

"It took 22 medication changes and adjustments before we got it right. With the help of my psychologist and psychiatrists, I was able to experience post-traumatic growth, write a book, and now I'm doing better than I was before my diagnosis."

Dr. Kerry Bernes is a clinical psychologist and professor at the University of Lethbridge who co-authored the book, and has helped Wegner get to where he is today.

He said he still remembers meeting Wegner and his parents.

"He literally talked non-stop for 55 minutes. His mom and dad and I could not speak at all. He had to tell us everything," said Dr. Bernes.

"His goals were to become a professor of everything with his heightened energy state that he was in."

Dr. Bernes added that once Wegner had started to receive the proper treatment, he was determined to stay healthy.

"He became an extremely hard worker. A hard worker in hospital, a hard worker after the hospital with me, to build a program to sustain his mental health forever,"

"We call that post-traumatic growth, where he was better after this event than he was before the unfortunate diagnosis of a severe mental illness."

Wegner is now a student-teacher who is set to graduate from the University of Lethbridge to pursue a career as an English teacher.

"I am unbelievably proud of him. This is a young man who has worked so hard to be better than he ever was," said Dr. Bernes.

Wegner hopes that by writing an open memoir of his experiences, it will show those living with mental illness that it can get better.

His book Manic Man: How to Live Successfully with a Severe Mental Illness is available for purchase in Lethbridge at Chapters, Analog Books Inc., the U of L Bookstore, and on Amazon.