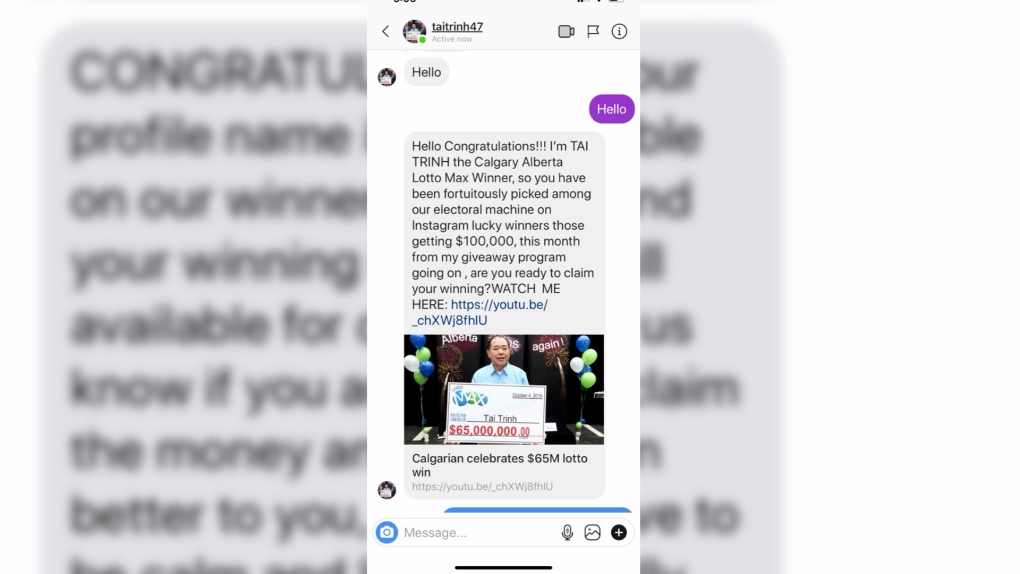 This message featuring a picture of Tai Trinh was used to try and scam a Calgary woman. (Photo courtesy Billie-Jean Duff)

The win is not only the largest in Alberta’s history but also tied for the Canadian record.

And the image of Trinh holding his massive check is now being used in a scam.

Billie-Jean Duff was contacted March 9 via direct message on Instagram claiming she was chosen by Trinh to receive some money through a federal government grant program.

One message to Duff said, "I'm randomly picking people on Instagram and giving away $100,000 to any random winner so you are among of them ... Congratulations to you ...”

Duff says the sentence construction and wording was a clear indication that this was not Trinh, but someone posing as him to get money.

"It's just to rip off people like a lot of scam artists do but they’ve gotten personal about it," said Duff.  "They’ve involved an actual person as opposed to your more traditional scams."

Further messages by the scammers asked her to pay $1,000 in "clearance fees" to claim the money.

March is Fraud Prevention Month and this week focuses on identity theft.

Sgt. Matt Frederiksen is with the Calgary Police Service fraud prevention team and sees a lot of these sorts of scams.  He knows scammers are trying to play on emotions to get what they want.

Frederiksen says if it sounds too good to be true, it’s a scam.  He recommends speaking to a trusted friend or family member about any information or requests that could be fake.

"Take that step back, go talk to someone, think about it critically, 'ok why would they do this, what’s the likelihood of this being genuine,'" said Frederiksen. "And that person who has no emotional connection to the situation is going to go, 'No, I’ve seen this, it's a scam,' and they're either trying to get your money or they’re trying to get your identity."

Duff hopes no one gets taken by this scam and the fraud prevention team says to only call police if you have given money or your personal information to scammers.

Otherwise suspected scams can be reported to the Canadian Anti-Fraud Centre online.