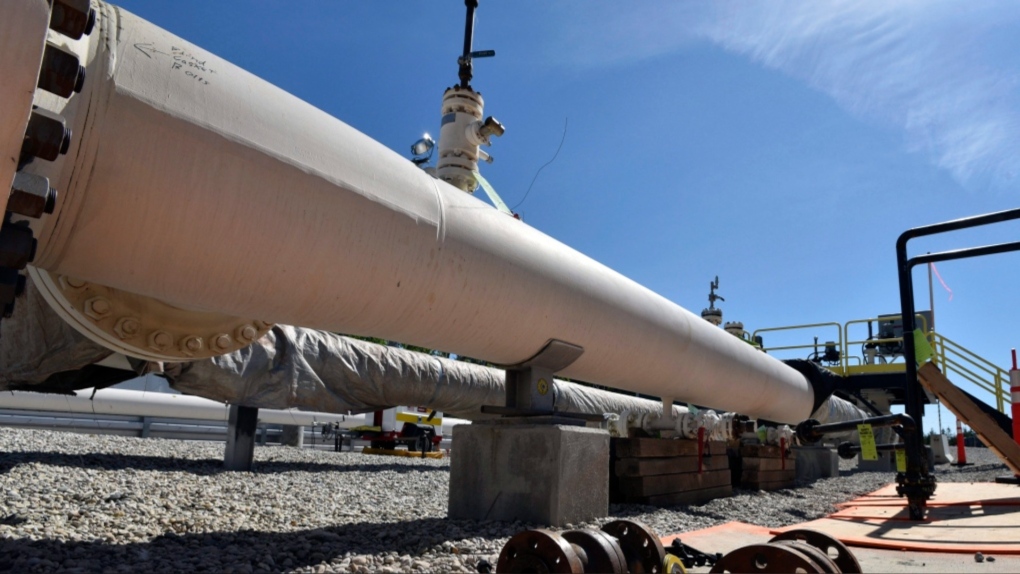 CALGARY -- Less than a month after U.S. President Joe Biden nixed the Keystone XL pipeline as part of a sweeping climate plan, another pipeline with implications for Canada is in the crosshairs of a U.S. politician.

However, as talk surrounding the potential shutdown of Enbridge Inc.'s Line 5 intensifies on both sides of the border, shippers are confident that the oil will continue to flow, even as they make contingency plans.

Enbridge Inc.'s Line 5 moves about 87 million litres of oil and natural gas liquids daily from Wisconsin to Sarnia, Ont., passing through parts of Michigan's upper and lower peninsulas. Enbridge says it supplies 53 per cent of Ontario's crude oil needs and more than half of Michigan's propane for home heating.

Michigan Gov. Gretchen Whitmer last fall ordered a shutdown of Line 5 by May, saying Enbridge repeatedly had violated an easement allowing pipeline operations in the straits. The company is challenging the order in Federal Court and says it won't comply.

Sarnia Mayor Mike Bradley last week said 3,000 jobs at three local refineries will be impacted if Line 5 is shut down, adding to calls from the federal Conservatives and provincial politicians in Ontario and Alberta that Ottawa press the matter with U.S. President Joe Biden.

But on recent conference calls, the CEOs of oil refiners Imperial Oil Ltd. and Suncor Energy Inc. said they're not overly worried that the pipeline will stop deliveries, nor do they expect a shutdown to greatly affect operation of their refineries.

“While we think a shutdown of that pipeline is a very low probability, we are developing appropriate contingency plans that would allow us to supply our refineries in Ontario,” said Imperial CEO Brad Corson, adding those delivery methods may include use of the St. Lawrence Seaway, other pipelines and rail.

“With Line 5, we believe shutdown is a very low probability event,” chimed in Suncor CEO Mark Little on a call a few days later, adding any higher costs of crude transportation to its refineries at Sarnia, Ont., and Montreal can be recovered from strong local fuel markets.

The companies were given a real world test of their ability to live without Line 5 last summer when the pipeline was partly shut down for several days as a precaution after Enbridge noticed a disturbance to an anchor supporting one of its two underwater pipeline legs.

Little later reported higher transport costs but no disruption at Suncor's refineries, but it's unclear what would happen with a longer outage.

A 6.4-kilometre-long segment divides into two pipes that cross the bottom of the Straits of Mackinac, which connects Great Lakes Huron and Michigan. Opponents say that poses too great a risk of a catastrophic oil spill into the lakes.

Enbridge says the pipeline is in good condition and has never leaked but it reached an agreement with then-governor Rick Snyder, a Republican, in 2018 to replace the underwater segment with new pipe that would be housed in a tunnel to be drilled through bedrock.

Whitmer's shutdown order refers only to the existing pipeline.

In its termination notice, Whitmer's office said the 1953 easement was wrongly granted and violated the state's public trust duty to safeguard its waters. A report by the Michigan Department of Natural Resources said Enbridge had failed to meet safety standards.

Enbridge countered in a lawsuit now before the U.S. Federal Court that the federal Pipeline and Hazardous Materials Safety Administration has “exclusive authority” over energy pipelines, adding that Michigan's shutdown order violates the U.S. Constitution by hampering interstate commerce.

Whether the state is legally empowered to close the Line 5 pipeline is the key question before the court, says Dennis McConaghy, an author of two books about pipelines and a former executive with TransCanada (now called TC Energy), the owner of the recently cancelled Keystone XL pipeline.

“Whitmer's order gave them until the middle of May to shut it down and they're now basically going to court really on a matter of jurisdiction,” he said in an interview.

“My own view is that Enbridge should win this case but it always depends on what judge you get. There's high uncertainty.”

Courts have been reluctant to shut down operating pipelines, pointed out Phil Skolnick, a New York-based analyst for Eight Capital who covers senior Canadian oil and refining companies.

As an example, he said, when a judge ordered the three-year-old Dakota Access Pipeline to be shut down last summer due to a deficiency in its environmental impact assessment, an appeal court judge upheld the order to complete the assessment but allowed continued operation of the pipeline.

Michael Blumm, a law professor at Lewis & Clark Law School in Oregon, agreed Enbridge would likely cite precedence in an appeal if the court decision favours the state.

State law could be pre-empted if there's a conflict between it and federal law but usually the federal and state laws can coexist, he added. He said the Federal Court could also ask the Michigan Supreme Court to give an opinion on the applicability of the public trust doctrine in the case.

Enbridge, meanwhile, is determined to defend itself in court, although it says dates have not yet been set.

“We will vigorously defend the validity of the easement and our right to operate the pipeline,” said spokeswoman Tracie Kenyon in an email on Tuesday.