It shows Willett asking the province to help intervene with the blockade.

On Feb. 12, Willet sent the minister a text that read, “If you get a chance could you find out why the premier is ignoring the province being held hostage by domestic terrorists? And why he has not labelled it such? My rant for the day.”

Despite the two having a lengthy chat history and often texting multiple times a day for several weeks prior, it took the minister two days to respond.

She asked Willet, “Are you doing OK?”

“It shows a lot of chaos with the government and a lot of concern and really no certainty about how to actually deal with it. And what comes across is the problem of dealing with a lot of people who won't obey the law,” said Trevor Harrison, a professor of sociology at the University of Lethbridge.

The Alberta government is testifying it had the situation in Coutts under control and the use of the Emergencies Act by the federal government was unnecessary.

“You can see there's a kind of fumbling away here of who should be doing it, who's responsibility is it and how's the best about dealing with it without having it escalate even further,” Harrison said. 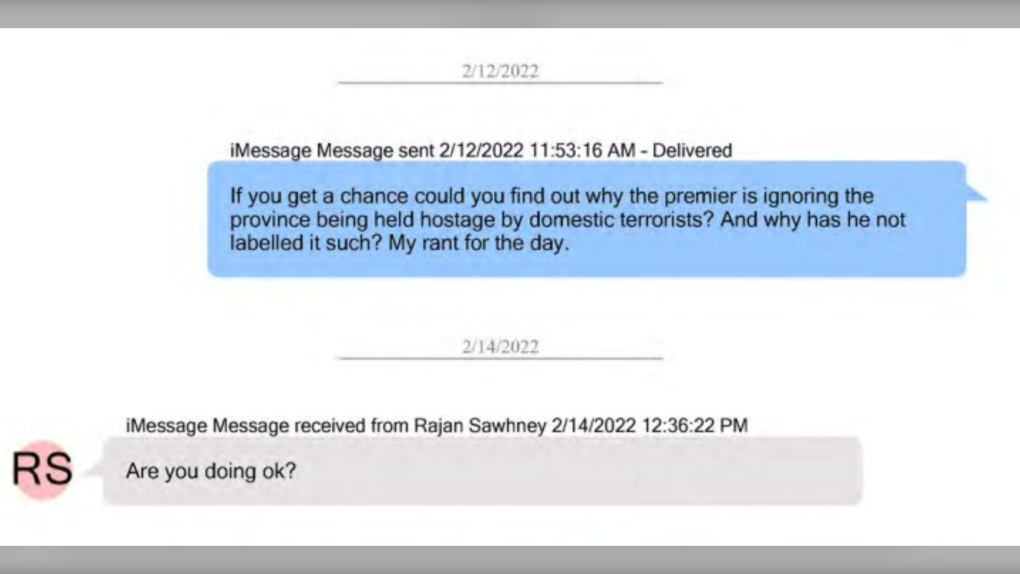 Willet said in the chain that “the conspiracy theorist in me can't shake the feeling we are being manipulated.”

The documents show Sawhney also told Willett to prepare for a rough couple of weeks.

Willet said in the chain that “the conspiracy theorist in me can't shake the feeling we are being manipulated.”

Sawhney asked by whom before saying, “I'm a bit of a conspiracy theorist, too.”

Willett said that, while he had no proof, he blamed Russia and China.

Sawhney then said there’s “a lot of disorder and we are only hurting ourselves.”

“This is a very difficult situation that in retrospect, you'd say, ‘Well the government should have come down a lot harder, a lot faster.’ But one can understand their reluctance to do it given everything else they were dealing with it,” Harrison said.

Willet will testify before the Public Order Emergency Commission on Nov. 9.