‘It smelled pretty sour’: Albertans lose over $3.5 million due to grandparent scam

‘It smelled pretty sour’: Albertans lose over $3.5 million due to grandparent scam

Alberta police are once again warning people about a scam that has caused people in the province to collectively lose $3.5 million dollars this year.

Calgary resident David Savage was almost one of those victims.

A few months ago, Savage was sitting in his kitchen when he got a call from someone claiming to be his grandson.

He told Savage he was arrested for hitting a pregnant woman while texting and driving.

“I said ‘you’ve got to be kidding me! What happened?'” Savage told CTV News.

“It terrified me that he could possibly be in this situation.”

Savage’s so-called grandson then asked him for $9,000 in cash for bail and told him someone could come by the house to pick it up right away.

“I mean it smelled pretty sour. That’s just not the way things work to my knowledge anyways,” he said, noting that the caller’s voice didn’t sound like his grandson but they knew his grandson’s first name.

Savage hung up and called his daughter to see what she knew.

“My daughter said she thought it was a scam so, I got off the phone and I had Jackson’s cell phone number so I phoned him,” he said.

It turned out to be just that — a scam that targets grandparents.

While the storylines scammers use can differ, there are two common themes: urgency and secrecy.

Victims are told to make the payment immediately or there will be consequences. They are also told no one can know because it’s embarrassing or because the judge has placed a publication ban or “gag order” on the case.

This year, Albertans have collectively lost over $3.5 million to the grandparent scam.

Eight people have been charged in connection to it in Calgary this year.

“September saw a sharp rise in this fraud with 93 reported incidents in which 35 victims lost money to the scammers. In October, we noticed a decrease in the number of reported grandparent scam incidents,” said Staff Sgt. Geoff Gawlinski with the Calgary Police Service.

“However, we know that fraudsters are being clever in their tactics and that it’s possible for anyone to fall victim to a fraud or scam.”

Cpl. Sean Milne with the RCMP Federal Serious and Organized Crime Unit said the problem is nation-wide and beyond.

“The grandparent scam is not something unique to Canada, it does occur globally. It may sometimes occur in waves, just as scammers simply pick a different area in the phone book or a different area code that they operate out of,” he said.

Milne said fraudsters find out personal details about the victim and their loved ones online through social media and other platforms to make it more believable.

“It could be as simple as who keeps their name in the phonebook anymore,” he said.

“In many cases, the scammers will maintain and sell lists of people they’ve obtained information from before. So, a person may be contacted for an unrelated scam and have their personal information taken down and that information in turn passed on to a different group of scammers who may be running grandparent scams.” 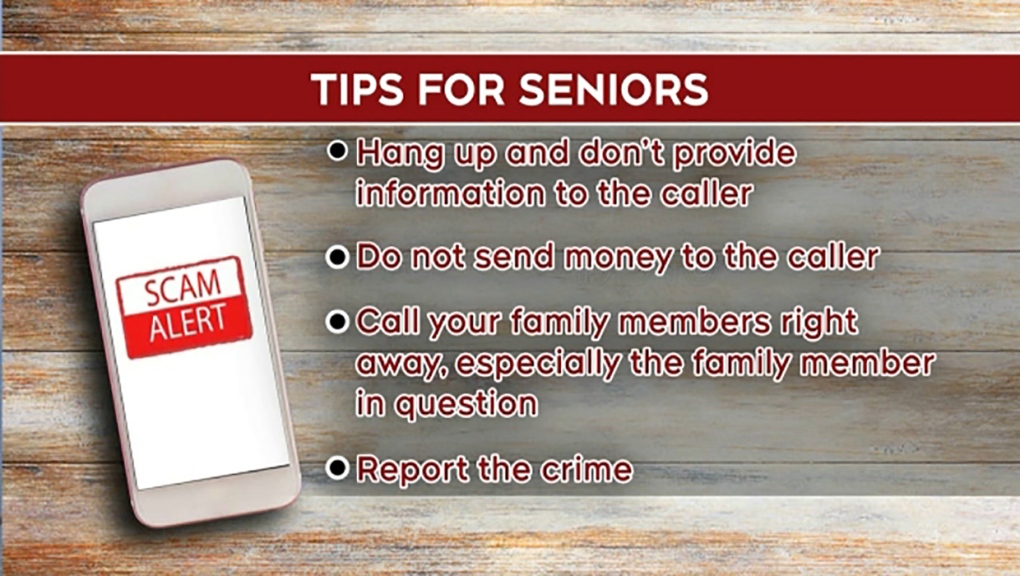 Police warn seniors who get a call like this to hang up and not provide personal information or send money to them.

They should also call their family members right away, especially the one in question to confirm the situation, and report the crime to police.

“These types of frauds are frequently underreported. So, even if the amount seems insignificant or you caught on to a scam before any money was lost, please let us know.”

Police also remind people that bail is always paid in-person at a courthouse or correctional centre, and that police and courts will never demand cash be picked up in-person or mailed.

As for Savage, he was never contacted by the fraudster again, but he knows not everyone is as lucky.

“You cannot be too careful. And I was almost not too careful,” he said.