The owner of a contentious Alberta parade float that sparked controversy after photos of it began circulating online this weekend is speaking out.

Lynne Hoff was behind the float, which appeared in the Sundre Pro Rodeo's parade on Saturday.

It was a John Deere tractor pulling a manure spreader with the phrase ‘The Liberal’ on it in red lettering, driven by one volunteer dressed as Prime Minister Justin Trudeau while another volunteer, dressed as NDP leader Jagmeet Singh, sat on the back of it.

Hoff says it was political satire.

"The last thing it was, was racist," she told CTV News.

"If the leader of the NDP party would have been a blond woman, I'd have been in there. It wasn't anything to do with the Sikh community."

Hoff says Sundre is a very welcoming and inclusive town and that the float was motivated by a tumultuous two years of COVID-19 restrictions, federally and provincially.

"These lockdowns have kept Sundre from having their parade for two years," Hoff said.

"We just wanted to bring some levity and showcase that a little bit. There was laughter all the way down the parade route." 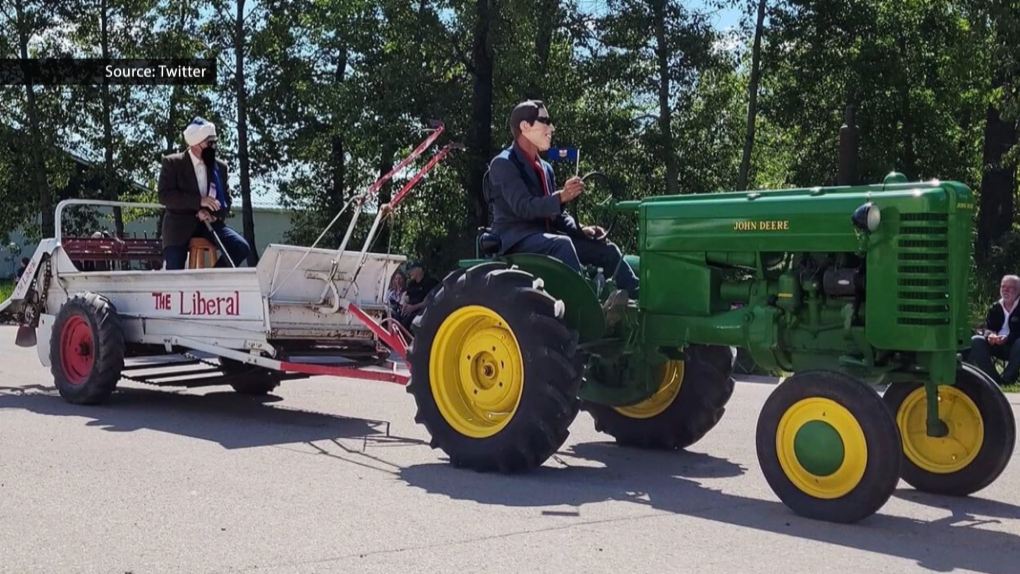 Unsanctioned entry in the Sundre Rode Parade in the Alberta town that including depictions of Prime Minister Trudeau and NDP leader Jagmeet Singh. (Twitter)
On Sunday, both the Sundre Pro Rodeo and the parade committee said they did not approve Hoff's entry.

"The entry was not approved and, upon further investigation, joined the parade without passing through any registration," the committee wrote in a statement that was posted on the Sundre Pro Rodeo's Facebook page.

Hoff says she is a supporter of the rodeo, but believes there may have been a miscommunication between organizers and herself.

"I was a little surprised," she said. "I don’t sneak around about anything."

"The Sundre Rodeo Committee is a wonderful group of people, they're all volunteers and I am not going to contradict what they said, but I think that there was a mistake."

Hoff says those who found the float offensive have a right to be offended.

"I don’t think it was done in poor taste," she said. "It was political satire."

She says Canada has seen political satire dating back a century, referencing The Milch Cow, a political cartoon from 1915 depicting easterners raking in rewards from hard working western Canadians. 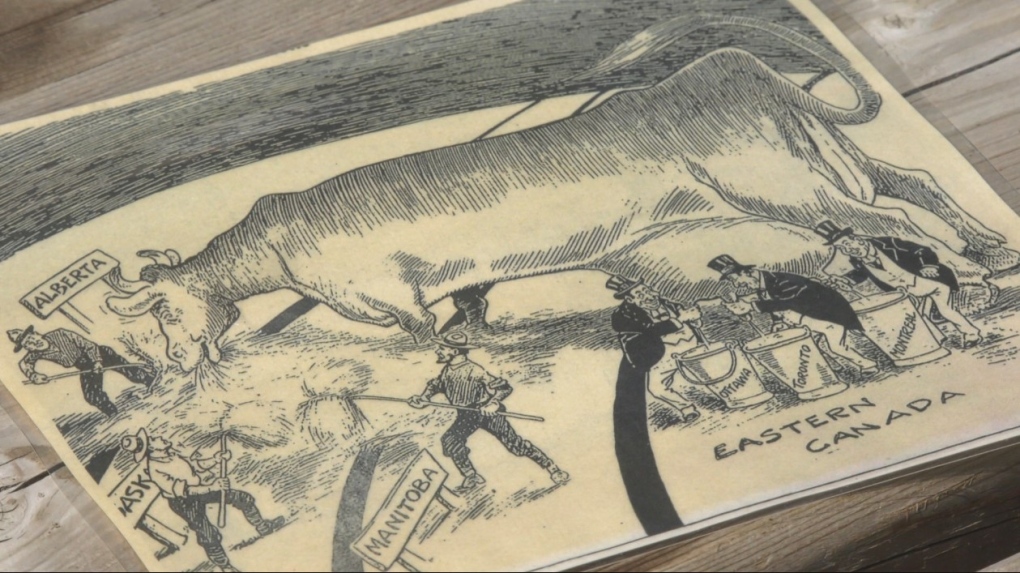 A copy of The Milch Cow, a political cartoon from 1915.
"It shows the cow that is Canada," she said.  "It shows Alberta feeding all the hay, Saskatchewan and Manitoba doing more work, and central Canada getting all the milk and that really hasn’t changed for 100 years."

Hoff says anyone who found the float racist or offensive is welcome to visit Sundre.

Mayor Richard Warnock says the town does not condone any type of racism.

"We are extremely disappointed to learn about an unauthorized float and their attempt at a political statement gained access this past weekend to an event that our community has celebrated for years," said Warnock.

When questioned if felt racism was not the intention of the float, Warnock said no.

"I don't believe that racism was intended against the Sikh community," he said.

"But nevertheless, it was taken that way, and therefore, we just can't have that."

"Come out here and see for yourself," he said.

"Don't just sit in Calgary and yell 'racism' because you see something that you don't like. That was a political statement."

Persaud says he has lived in Sundre for five years and has always felt welcomed.

"I don't like it when people say that this is racism, and this town is racist," he said.

"Look at me, I'm a man of colour, living in this town. I'm well accepted here and I've never had anything derogatory said to me."

The parade committee does say that it is putting in place measures that will stop similar floats from showing up in the parade in the future.

Calgary’s mayor Jyoti Gondek reinforced her view on Monday that the float had racist undertones.

After a Friday of having women’s rights knocked back 50 years, what can I possibly say about this? Many things. Nothing. You pick. I’m exhausted.

Yet, people like me keep going, we keep fighting & keep pushing for better.

She says it drives people away from Alberta, a province she believes can have a bad reputation for similar events.

“It’s not funny, it’s not amusing, you’re killing our economy by perpetuating this stereotype,” said Gondek.

When asked what measures are in place to prevent a rogue float from joining the upcoming Calgary Stampede Parade, officials with the organization issued the following statement:

The volunteer Parade Committee has a thorough selection process for its entrants, along with on route security to ensure the safety of participants and guests.

"The Calgary Stampede Parade has been taking place for over 100 years and has always embodied the spirit of our community."

A Quebec Superior Court judge has temporarily suspended two articles of the province's new language law, saying they could prevent some English-speaking organizations from accessing justice through the courts.

WHO plans to rename monkeypox over stigmatization concerns

The World Health Organization says it's holding an open forum to rename the disease monkeypox, after some critics raised concerns the name could be derogatory or have racist connotations.