Jumpstart Games get youth moving in the southeast 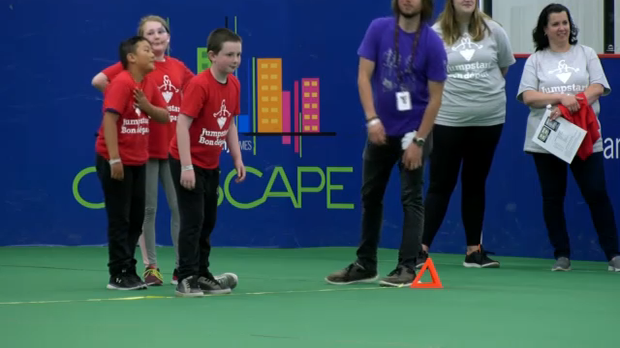 The event was the Jumpstart Games, hosted in the vast confines of the Calgary Soccer Centre.

The cavernous space in southeast Calgary was transformed into a giant playground for underprivileged and low-income youth to try their hands at new sports, meet new people, and ultimately connect with one another.

The games featured seven different stations, including activities such as football, soccer, sprinting, and an obstacle course.

Kids aged mostly between seven and 15 funneled constantly through the various sports challenges.

Jumpstart raises more than $20 million annually for kids in Canada to be involved in sport and play.

“A lot of these kids come in and they are shy and they aren’t sure what to expect,” said Brittany Schussler, a three-time Olympian and organizer of the event.

“It definitely opens their eyes to these different possibilities, to sports they could play or things they may be interested in, or that they just might be a part of a team.”

Sneaking away for a few moments from her friends, who were happily scarfing down an endless supply of hot dogs, 11 year-old Charity Leigh of Forest Lawn said, “it’s good to learn new things ... if you just stick with one thing it gets boring. If you learn new things, it’s very exciting.”

When asked if she planned on sticking with some of the new activities she was learning, Charity, after a contemplative pause, said, “maybe ... I can teach some of my siblings. So yeah, the game can go around.”

As for the impact the Jumpstart Games can have on kids, Schussler said a sense of belonging and enjoyment is the key.

“I found that when I was at home and felt I truly belonged was when I was speed-skating,” she said, “so if we can give even a couple of kids that moment, or feeling of ‘this is what I feel like I should be doing and these are the people I want to be with’, that’s what I want kids to get out of this.”

Since 2005, Jumpstart has distributed more than $6 million to aid Calgary youth in recreation, sport, and play.